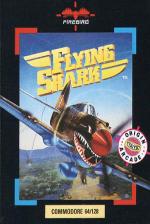 Firebird's coin-op conversion of Taito's Flying Shark sees the player take to the air in the plane of the title.

Roaring over vertically scrolling enemy territory, the player battles through Squadrons of fighters which approach from the top of the screen, intent upon repeling the solo craft with a hail of bullets. Ground defences also enter the fray, in the shape of mobile tanks and static gun emplacements.

The Shark is armed with a gun and an unlimited supply of ammunition, plus three smart bombs which are fired from the plane to explode at a safe distance, destroying all enemies in its path. The number of smart bombs remaining is shown at the side of the screen, together with the lives remaining and the current score.

Supplementary firepower may be acquired by collecting the floating symbols which are released upon the destruction of specific attack waves. These endow the Shark with extra guns, bombs and planes, depending on the colour of the downed aircraft.

Points are awarded for every successful 'kill', and accumulation of points is rewarded with additional planes, up to a maximum of nine. As a further incentive, the total annihilation of enemy formations yields a large bonus, whenever the 'one up' symbol flashes on-screen.

There are a total of five levels to be conquered, each of which is loaded in separately. A continue option allows later levels to be played again, rather than having to return to the first one each time the game ends.

The arcade version sports some lovely graphics, but isn't the most awe-inspiring game of all time. On the Commodore, you lose the graphics and end up with yet another in a long line of vertically scrolling shoot-'em-ups. The action is very tough from the outset, and by the time level three is reached, the enemy both on the ground and in the air are getting incredibly aggressive.

The plane is a little on the sluggish side, making it difficult to avoid enemy bullets, and I don't like the way the plane has to move a quarter of the way across the screen before the landscape scrolls.

Flying Shark is by no means a bad conversion, but as a Commodore game it just has nothing new or exciting to offer.

Oh dear, I feel a severe case of the Biggles syndrome coming on here. I can think of many vertically scrolling shoot-'em-up games involving you as the daring pilot of an aircraft, braving enemy flak and anti-aircraft missiles - so why produce another one?

Graphically the game is good with a rather cartoonesque aeroplane zooming across a nicely detailed, smooth scrolling landscape. The difficulty level is very high, with enemy tanks and aeroplanes spanging bullets all over the shop, and initial interest is soon replaced by frustration as wave after wave of baddies kick the hell out of you.

All the ingredients are there for a good blast, but it seems that the enemy have a much better time than you do.

Yet another difficult shoot-'em-up vertically scrolls its way into the office to join the likes of Hades Nebula, Vengeance, Blazer and so on.

Visually, the game is reasonable (although at times, green planes attac across a grassy areas and completely disppear) and my ears are none the worse for wear, but I'm afraid that for me, Flying Shark proves to be more a course in self-restraint than anything else.

The game is very hard and extremely frustrating: you're constantly assailed by swarms of enemy craft who attack with unnerving frequency and deadly accuracy.

Flying Shark does provide a challenge, but satisfaction is hard-won, and at the expense of a large chunk of patience.

Graphics 79%
Colourful, but occasionally blocky backdrops, with some effective animation and smooth scrolling. The sprites are adequate in look and movement.

Sound 70%
The main soundtrack is alright, and the end-of-game jingles are bland, but inoffensive.

Hookability 60%
The initial level of difficulty is a hard factor to overcome.

Lastability 57%
Proficiency maketh progress - but it's slow and often painful.