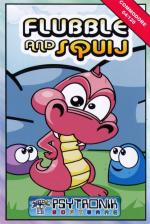 Flubble And Squij is a tricky platformer which is currently available from Psytronik for the Commodore 64. It comes in two versions which offer similar game mechanics but very different sprites. For the sake of ease, this review is of the "Remix" version.

You play Flubble, a dragon-like character, controlled with the joystick. Pushing up will jump and pulling down will teleport - whenever you position him over a pipeline. As is the usual fare of platformers, the platforms are patrolled by aliens intent on colliding with you and taking away one of your precious lives. To combat them you can press the fire button, which puts Flubble into a "tail-spin" and causes him to despatch aliens he collides with.

The good news about the tail-spin is that it is remarkably effective. The bad news is that it's a very odd effect to behold - your dragon spins through 360 degrees rather like many platform characters do just before death!

Indeed, Flubble seems to mess about with quite a few of the more "tried and tested" inclusions of classic platformers like Super Mario (NES) or Crazy Sue (Amiga). Amazingly, the fact that the fire button doesn't jump your dragon, or produce some sort of bullets, means that, until you read the instructions, it's not immediately obvious what to do in the game at all.

The aim is, however, to collect the Squij characters, and a handy counter of those remaining is shown at the bottom right of the screen. So, guided by the illustrated Squij at the bottom-right, and armed with the ever-powerful tail-spin, off you set on your mission.

The screen scrolls right only, and at a steady pace, keeping Flubble in the middle of it at all times. Jumping is easily controlled, and your only real worry is that, after tail-spinning, Flibble takes a few seconds to recover. Nine times out of ten this is no problem at all as you will have already bounded into all the aliens you wanted to despatch and his recovery period gives you a nice breather. On other occasions, you may have wiped out all the enemies you could see but you may, in your exuberance, have pushed the screen so far to the right that another enemy is now making his way toward you.

The choice of alien sprites, the right only scroll, the pipelines at the bottom of the screen and the jumping effect give Flubble And Squij a very similar feel to Super Mario. Unlike that classic, there's no timer to contend with and a certain amount of mental mapping is required to determine where the Squijs can be found.

And this is really where the game falls down. Firstly, looking at the illustrated Squij screen right leads you to suspect you need to find cutesy, green jellyfish - but actually some Squijs appear quite differently, hanging upside down, or appearing in cyan instead of green. Secondly, the teleporters (pipelines) usually teleport you backwards rather than to a wholly new area. It gets very frustrating trying to remember which Squijs you've collected already... and accidentally teleporting right back to the very beginning would be frustrating enough in itself - but when you also realise teleporting reincarnates all previously-killed aliens, it's almost enough to cause you to have the type of tantrum you hoped you had grown out of!

The game has eight screens and is available on both tape and 5.25" disc. It's actually the type of game that may grow upon you with practice - there are inclusions like mushrooms that inject a bit of variety to the travails. However, in their regard I have to sound a note of caution - shortly after I collected one, the game appeared to completely crash, causing Flibble to teleport uncontrollably every few seconds (and whilst being nowhere near a pipeline).

Hey ho. In summary then, an excellently executed, cartoony platformer but one which, even in its "remixed" form seems slightly rough around the edges. Flubble And Squij is available from Psytronik.