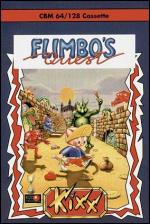 Shampoo and conditioner? Take two bottles into the shower? Phil "Sham" King just wants to wash his hair and go... and tackle a bad dandruff problem.

Blimey, it only seems like yesterday when this platform romp first came into the office. Not long after, it was released on the compilation cartridge accompanying the ill-fated GS console (keyboardless C64).

Dr. Franz Dandruff is the flaky villain of the piece, having kidnapped a girl named Pearly. The dirty old man wants her bodily juices to reverse the ageing effects of a failed immortality experiment. Naturally, Pearly's boyfriend, Flimbo, is none too pleased about this arrangement and sets out to beat Dandruff and get his girly back.

The horizontally scrolling action has similarities with the Thalamus classic Hawkeye, with Flimbo running left/right, leaping between platforms and blasting away at tough little monsters. Collecting parchments reveals the letters of a computer code needed to finish the level. Cash collected from dead nasties, or in secret treasure rooms, can be spent in the level shop for extra firepower, temporary immunity and an extension to the game's overall lime limit.

There doesn't sound a lot to the game, and there isn't somehow though, its simplicity holds a strange compulsion. Maybe it's because what little there is here has been so well implemented - someone's obviously done overtime on the playtesting. It might have been a boring blast, but for a strict time limit which forces you to rush around, skilfully avoiding most of the baddies.

After a while it does get a bit repetitive, with identical gameplay on each level. What really impresses, and keeps you playing, is the top-notch graphical quality. The backdrops are very detailed, yet extremely colourful, and come complete with a clever parallax effect. A catchy soundtrack is the icing on the cake in a release ideally suited to budget.

The backdrops are very detailed, yet extremely colourful, and come complete with a clever parallax effect.