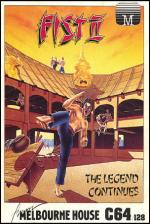 The impact of Exploding Fist has prompted Melbourne House to follow up on their success. Does Fist II measure up to its older brother?

The Way Of The Exploding Fist took the marketplace by storm when it was first released. Since then, the Melbourne House programmers have been working on the sequel to repeat this success. Like many follow-ups the result is disappointing but is it still a bad game?

Centuries after the Grand Master Tournaments, the devotees of the Exploding Fist are still in existence but they have lost much of the skills and knowledge of their forebears. Scrolls containing the wisdom of the Masters have been scattered around the land, and without this information, the wicked Warlord has been able to subjugate the people.

The Fist cult have sworn to rid themselves of this evil despot who rules from inside a heavily guarded volcano and legend tells of a young hero who will come to their aid in unarmed combat against the legions of evil. That time has come!

Against this background you will find yourself in a dank, dark forest at the foot on all sides but they must be sought out and destroyed. The action is controlled by joystick allowing the hero to move left and right across the screen. When an enemy is encountered, this is supplemented by a range of punches and kicks which, if skillfully combined, will destroy any foe you are likely to meet. Throughout the game the music has the same ethereally evil atmosphere of the C64 disk version of The Hobbit. As you move from place to place, the music changes accordingly.

The animation of the fight sequences is up to the high standards set by Fist I, but the general walking around has a few 'loose' moments. The problem shows itself when your character appears to walk on the spot while the background scrolls behind him. Not particularly annoying as far as the gameplay is concerned but extremely annoying visually.

Setting off in either direction soon brings you face to face with an enemy. If you take my advice, try heading to the left. The fighter you meet is generally strong and there is no escape but defeating him now will save difficulties later.

The strength of the hero and his enemies is indicated by scrolls at the bottom of the screen, the longer the scroll, the stronger the character. When the blows start to land these scrolls get shorter and shorter until one of the combatants has no scroll energy left. Just one more blow brings death. If it's your scroll that disappears first, it's bad news if you are still a novice but if you've discovered a scroll, it becomes a mere inconvenience (the first time at least!).

The first enemy successfully eliminated, you're ready to find another and if you continue in the same direction you won't be disappointed. On entering a cave you meet a ladder rising up into another cavern above. Beware, there is a guard whose strength could be high. If the last battle took a lot out of you, wait until your energy returns. This may take a little time so go and have a coffee.

When you're fully refreshed, nip up the ladder and watch your opponents energy scroll. If it looks a little formidable, climb back down the ladder. Repeat this process until the enemy seems suitably weak and then leap into battle. A well-timed flying kick at this point will all but wipe him out immediately. If the outcome of the battle is successful, the temple is just off the screen to the left. A quick prayer will restore your energy to the full.

Before leaving the temple, notice the icon at the top of the screen. This is the scroll you need to gain extra strength and now it must be sought.

Back down the ladder, past your starting point, is an old palace which houses the scroll that you need. If the battle with the first palace guard gets a bit too much, try jumping past him and run up the ladder before he can do anything about it.

There next follows a long series of ladders and floors which becomes tediously time-consuming and uneventful. At last you reach the screen and door which must be punched to allow you to progress. After another perambulation you will meet the guardian of the first scroll.

The soul-destroying truth is that, once you have defeated the guard, you have then to wander all the way back to the temple. Unless you left the palace guard standing, you will meet with no opposition apart from the severe urge to go to sleep.

When you reach the temple your vigour is restored to new heights and you can head off in search of more scrolls and more enemies. For each scroll recovered, you gain more fighting skills and an extra life. If you are 'killed' you then reappear in one of the temples.

At first I thought that Fist II was the dullest of all games, apart from a few hot spots. Once you accept the fact that the majority of the time will be spent travelling from place to place with nothing to do but nurse your joystick, the remaining gameplay is the kind of high energy action that we would expect from Melbourne House.

The inclusion of a practice mode is therefore a disadvantage because there is much more fun to be had battling against all the foes from the game when they're either controlled by computer or a friend. This may sound like an updated version of Fist I, it is and it's yet to be bettered by Melbourne House.

The dullest of all games, apart from a few hot spots.