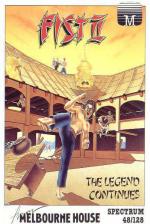 Stripped to the waist, barefoot and alert, a stocky figure stalks through the bamboo thickets. His arms raised, ready to loose an attack of unbelievable ferocity and speed upon any man or beast that may dare to give him a wonky glance.

This, fellow brick-kickers, is the one "you've all been waiting for". Early last year, the entire games-playing 'community' could be found hammering away in Way of the Exploding Fist at computerised or human opponents in ludicrously serious bouts of hand/to-hand GBH.

Now, almost a year later comes the sequel. At face value there doesn't appear to be a whole lot you can do to make a sequel of a game that - essentially - involved little more than kicking things.

So Melbourne House has decided to change things a bit, and actually give you a purpose in life, as opposed to simply wandering around, hacking away at the nearest person.

Your quest is to rid your home-land of a terrible tyrant who is making the lives of your fellow villagers very tedious.

Obviously, your foe isn't stupid enough to leave himself open to attack, and surrounds himself with lots of completely deadly bodyguards.

It's not really worth your while trolling up to the Warlord and suggesting that he should leave your homeland alone and vacate the premises alone when you bear in mind that you are only a novice in the martial arts.

Thus, the first part of the game centres around your self-tuition of aforesaid arts. While walking around, you will stumble upon a number of scrolls. Now, each scroll contains some of the secrets known only to the most boss-eyed and creepy walk-on-rice-paper wizard types as found in all the best Fist-style movies.

Once you've got the scrolls (yes, hahaha very "double entendre", I'm sure) it's off to the nearest temple for a bit of mat-bashing in order to learn their secrets. Once used correctly, you can see in the dark, move immobile objects etc.

On the way, it's highly probable you'll run into a group of black panthers who will quite happily tear you to itsy bitsy ribbons if you don't do something about it. Doing something about it seems to consist entirely of kicking them very hard in the head. Moderately funny but hardly a) mentally taxing / b) socially aware.

Other delays are incurred by dealing with the bodyguards that you encounter.

This is real Fist territory as you flail away with limb and joystick, inflicting increasingly effective blows. Most of the joystick moves from the first game are here, roundhouses and all. Each time you score a hit on your foe, a pleasing graphical whack indicates contact, and his stamina gauge is depleted.

There's a good deal of running around involved in Fist II. As each scroll has its own temple, and you can only use it in the correct one. you'll often have to retrace your steps. As this often involves avoiding the groups of black cat things and more bodyguards, it can become taxing - even challenging.

Graphically it's swings and roundabouts. The backgrounds aren't great, and the scrolling is far from pixel-smooth. On the other hand, your character runs about very pleasantly and the fights are much better than in the original.

Lacks polish, but Fist II is still a damned good fight for anyone's money. And this time there's scope for a bit of mapping too.

Definite improvement on the first game. Now you get the chance to put all that whacking to a kind of purpose.

Definite improvement on the first game. Now you get the chance to put all that whacking to a kind of purpose.