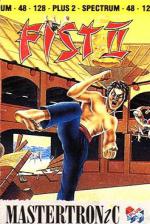 This one must go down as one of the greatest computer game disappointments of the decade. If you remember the enormous impact made by Way of the Exploding Fist, a) you're as ancient as I am, and b) you'll probably remember the thrill generated by the first ever martial arts game on a home computer. For the first time, instead of shooting alien opponents, you could punch, kick, knee and chop your enemy into an insensible mass. It was great.

Some time later Fist 2 appeared, and what a massive disappointment it was. For some reason the graphics and animation seem to have degenerated; even worse, although the fighting element was still there, the main thrust, oo-er, was a sort of arcade adventure scenario in which you spent most of your time running around the flip-scrolling landscape looking for something to fight. Peasants, warriors, ninjas, shoguns, assassins and panthers (like, big cat type panthers) try to beat you to a pulp along the way, and after ten minutes of boredom you'll be quite happy to let them.

Theoretically Fist 2 should have been smashing, with the martial arts elements added to the arcade adventure theme. But the backgrounds aren't up to much, the playing area doesn't seem particularly large, and elements such as poisonous gas, and the ability to restore your energy by meditating in a temple, just serve to slow things down.

Give it a miss.