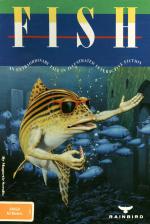 It sounds corny, and it's easy to say, but I have to: Fish is like no other adventure I've played before. And then again... Fish is something like bits of Leather Goddesses, Stationfall, Lurking Horror, Border Zone and The Pawn, all rolled into one, with a bit of Monty Python thrown in for good measure. Just what sort of game am I talking about?

I'm talking of the fifth game to come from Magnetic Scrolls, and the third one this year! Plotted this time by John Molloy (well known to regular C&VG readers for his contributions a few years back), Pete Kemp and Phil South, it takes the art of adventuring into a completely new dimension - underwater! And before you say "Underwater - it's been done before!", read on...

I don't know what it is about Fish that makes people go completely pun-crazy. I mean, thing about it... Why Fish? If someone mentioned cats to you, or dogs, or snakes, you are not going to start making the most awful puns imaginable - are you? Fish though, and it becomes pun city.

Magnetic Scrolls new game doesn't miss the opportunity to become the most pun-packed adventure ever.

There you are, one ordinary Wednesday morning, happily swimming round your bowl, when suddenly a plastic castle breaks the tranquility of the water in your bowl, knocks the pondweed to one side, and lands on the gravel beneath you. When you've quite got your breath back, you decide to explore the interior of this alien structure that is now occupying the major part of your environment. Snatching a quick ant-egg snack from the surface, you enter the dark interior with more than just a little apprehension.

Dagon, the god-like inhabitant of the castle, mistakenly believes you to have arrived in answer to an advertisement. Before he is prepared to offer you the job, he insists that you take his aptitude test, and return three keys to him. Facing you are three portals, each leading to a mini adventure. One takes you into a recording studio, famous for its recordings of the group known as the Seven Deadly Fins, another takes you to where a group of hippies are signing round a makeshift fire in a ruined abbey, whilst the third sets you down by a stump in a forest clearing.

No pouch full of colours in this stump, though. Instead, you'll find a little man who is completely off his rocker, jealously guarding a golden disc that commemorates the millionth copy of a Seven Deadly Fins number. This lunatic has his own philosophy for life, for which he thinks he is famous: Get a home, get a bird, and settle down. He has lived by it too. His best friend is and his exploding homing pigeon that hasn't a clue where to head for and is currently sulking in its cage not far away, following a dreadful row between the two. This is an utterly mad adventure, and one that definitely breaks the mould, as I found to my cost just when I thought I was winning!

And so, with the three keys safely retrieved, Damon gives you "the big one" - the task for which he wanted to hire you. It seems that the city of Hydropolis is in danger. Water is evaporating away faster than it is being supplied, and the entire fish-world is in danger. A special project has been set up to teleport large quantities of water back - but it seems it has been sabotaged. You find yourself transported into the body of fish-scientist Dr Roach, the man in charge of the project, and you must discover which fish are responsible for the dirty deed, stop them, and repair the damage.

There are plenty of suspects. To start with, there's your colleagues on the project: Eric Chubb, Simon Tench, and Bertie Bream. Having been given the day off, you'll find them down at the Hook, Like & Sinker, having a few sniffers.

Leaving your apartment (not forgetting your all-important Fishofax) you set off via the underground, for an appointment with the principal of the university, it's rush hour on the tube, and you are jostled by guppies on the way to the city, not to mention the crowds of ordinary pilchards and sardines, as you head towards the famous seat of learning. A little investigation will reveal that a number of key components for the 'device' on which the project depends are out of stock - and a further look round will uncover some likely replacements.

Here is an adventure full of fishy puzzles and puns, (Try playing The Prawn, or Gilled Of Thieves on the university mainframe...) that is guaranteed to produce shoals of laughter as you scratch your scales trying to fathom its depths.

Scrolls really seem to be cleaning up on the adventure scene this year. Mind you, it has to be said they haven't had much competition. With their old enemy Level 9 not producing anything new of late they have had the field to themselves. Then there is Infocom... What's happened to them? No new game since Christmas!

An adventure full of fishy puzzles and puns that is guaranteed to produce shoals of laughter as you scratch your scales trying to fathom its depths. 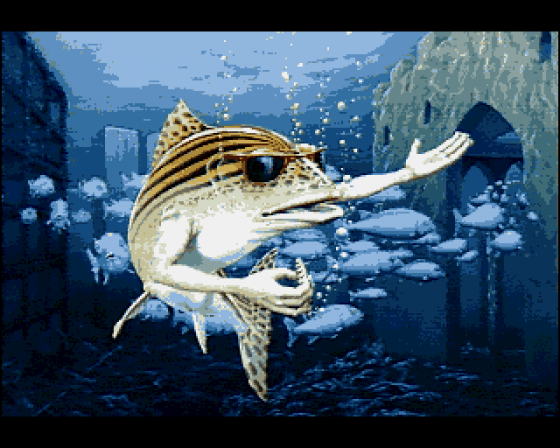 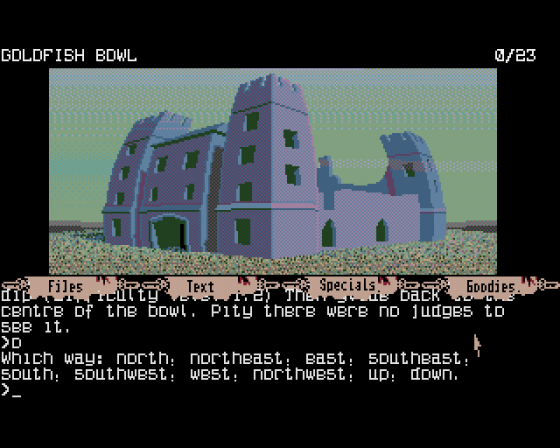 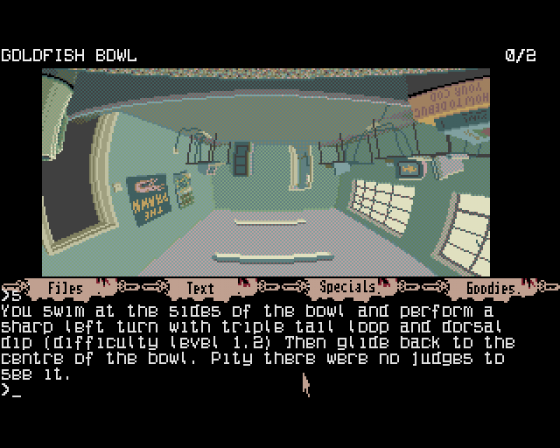