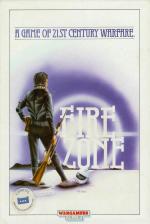 From the authors of the excellent games Battlefield Germany and Sorceror Lord, comes a jaunt into the future of warfare. The setting for the campaign is the 21st century when battles take place in minutes rather than months.

Combat is between two forces: the European League and the Pacific Combine. You can be either side and fight the computer. or you can use the two player option There's also a demo to show the shape of things to come.

You have a choice of three preset scenarios to play: First Blood, Surprise Attack and the Final Conflict. Buyers of the disk version of the game get another six scenarios to play through. Both tape and disk also have a game designer allowing you to construct maps and battles Each scenario is split into turns which have four phases: League movement, combat, Combine movement and combat again.

Your armies are made up of seven types of unit infantry, nova guns, striders, grav tanks, heavy tanks, leviathans and com-base. Infantry have always been an important part of battles and these are capable of destroying anything with their armour-piercing weaponry. The nova gun is heavy piece of artillery that moves slowly, but when it hits it's a devastating hit. Striders are bi-pedal attack machines which carry both short, and long range weaponry. Terrain is no problem for the grav tanks because they travel just above ground level at high speed. Heavy tanks are slow, but their powerful weapons make them difficult to destroy.

If you think they're tough, try a leviathan. They carry the firepower of a battalion of heavy tanks. Finally there's the corn-base which is the brains of your army.

The game designer has its limitations in that it only allows you to design other 21st century scenarios. It would have been better if you could design scenarios for every era, as this would have given it much more flexibility. I doubt if it would have been that much more difficult to do. Sound is very simple with bursts of laser fire and crude explosions. The graphics are simple, but colourful and easy to identify.

It's good fun to play, but the playing area is too small. An option to show the whole of the map in a smaller scale like that found in Sorcerer Lord would have been very useful. There are many scenarios to play through, but they are over too quickly. The short playing time means that you have little time to develop a strategy before the game ends.

Everything is easy to identify in green.

Grab Factor 69%
P. Introductory scenario to get you going.
N. Lack of overall map is a disappointment.

Staying Power 67%
P. 3 (or 9 on disk) scenarios to win at and also a designer program.
N. Game is over too quickly for you to develop a strategy

There are many scenarios to play through, but they are over too quickly... The short playing time means that you have little time to develop a strategy before the game ends.