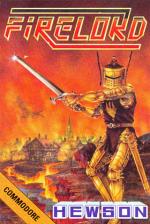 C&VG Golden Joystick Winner Steve Crow has come up with a real scorcher in the shape of Firelord! It's an arcade adventure in the best tradition of arcade adventures - plenty of action and puzzles plus a couple of new twists.

This is Steve's first game since the award winning Starquake - and you'll recognise some similarities between the two games when it comes to the style of graphic presentation. But Firelord isn't Starquake set in the Middle Ages. Far from it.

If you read our preview last issue you'll know the background to the game. But for those of you who missed it the basic idea of Firelord is, well, basic.

You play the part of Sir Galaheard, a noble knight out to end the rule of the Evil Queen who has enslaved the population of the land of Torot using the sacred Firestone which she has stolen from an unsuspecting and very friendly dragon.

Galaheart has to become the Firelord and defeat the Evil Queen. Not an easy task...

You begin the game - as a lowly peasant - in the village, battling flame ghosts who take the form of poor villagers. Our hero can zap these creatures - but only when he's collected an enchanted crystal.

All the real villagers are hiding in their houses. They can be persuaded to help you by giving you information, and you can barter with them for useful items.

When you begin the game you won't have anything to barter with. This means you're going to have to steal something!

Now normally a gallant knight like Sir Galaheart wouldn't dream of doing such a thing. But times are hard and there's a quest at stake here!

So you're going to have to do a bit of breaking and entering. You'll always find someone at home - but you can still walk out with a useful object if you're quick at manipulating the various icons on the bartering screen.

Succeed and you'll be able to trade. Fail and you'll have to stand trial! More about that later. First, let's take a closer look at trading - and cheating!

Once inside the house, stop or other inhabitable area, the screen will change. In the top right corner of the screen the character with whom you are trading is depicted. Below that is a cheat command. More of that later. Finally, on that side is the exit option.

Down the middle of the screen you can find the various services offered by the character.

A set of scales signifies that you may be able to trade with them.

A signpost will tell you that you can find out your location.

Using the cross-shaped cursor, you select which service you require, and how you intend to pay for it.

Now, back to the cheating part. Should you decide that it's worth the risk, you can choose to try and tip off the occupant of the building. If you get away with it, then you will escape with the object you desire, and the one which you promised to part with! However, if you are caught, you will find yourself at the trial.

If you're familiar with the bonus game in Uridium you'll get the idea of the trial screen pretty quickly. An arrow flashes back and forwards between two words - Innocent and Death. You get three chances to ensure you don't lose a life. If you get it wrong and the arrow points to Death one life goes - every time. So if you get nabbed early on in the game it could be quite short!

Your score can be found at the top left hand side of the screen, lives left are shown in the right. In the centre are bars which show the condition of your energy, weapon and bartering powers. Items you've collected are also shown at the top of the screen.

You'll also find useful things dotted around the landscape - things like the crystals and bits of food which help keep your energy up. Making a map is essential, and always remember where you've left a supply of food.

Firelord is an excellent game. Graphics are colourful and sound effects original - which is saying something on the Spectrum. I particularly liked the metallic tinkling sound which happens when Galaheart dissolves after running out of energy, or when he is wiped out by a baddie!