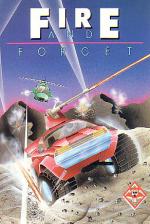 CHARGE UP THE HIGHWAY AND NEVER LOOK BACK.

It's the future, the UN has been replaced by squadrons of Thunder Master vehicles. Opposing it is the Intergalactic Liberation Organization which seems equipped with limitless numbers of helicopter gunships, tanks and machine-gun nests. These have already wiped out scores of TM squadrons. With the world's survival in the balance the most powerful Thunder Master is rolled out, and you chosen as its driver. Your weapons are tetranuclear missiles, usually aimed lust ahead of the TM, but after every couple of shots they zoom off into the sky.

If the car is hit it explodes, but miraculously this only reduces the fuel level, which has to reach zero before game over. Fuel can be replenished by driving over cones.

The game consists of three levels (you can choose which to start on) of six conflicts (sections) each. The 3-D scrolling is very fast, the main sprite is well detailed and the enemies impressive.

Unfortunately all the conflicts visually and in play. Difficulty does increase, but only because there's more baddies and less fuel. Also, if you keep to the far right of the screen you hardly ever get hit. If you don't cheat the action is fast and furious, but sadly the title is all too apt - a very forgettable release.

'Crazy Cars with guns is how Fire And Forget struck me. The speed with which everything moves is just as fast, but now there's lots of enemy fire to dodge. On my first few plays I was impressed. But as I got better and better, the game got worse, presenting neither new background graphics nor enemy vehicles. Maybe that's inevitable without multiload, but at this price Spectrum owners should expect more.'

On my first few plays I was impressed. But as I got better and better, the game got worse, presenting neither new background graphics nor enemy vehicles.