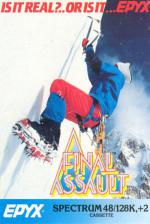 The only way is up

Cold? Pah! You call a few snowflakes on New Year's Day bad weather? Well, crawl back into bed with your hot water bottle because you certainly won't like this...

Final Assault begins by asking you to pack your bags. Along with pitons and ropes you can choose to take a pizza (honest) and various other items. Once kitted out you can choose one of six routes, two of each difficulty level. Climbs consist of both ice and rock faces, as well as crossing dangerous glaciers.

Ice faces are climbed with pickaxes, using a simple combination of up, down and fire. Rock faces require far more skill as all the limbs are controlled individually: the player moves them in turn, trying to find the best holds. Four icons show whether each limb has a firm hold, a weak hold, or none at all.

Once on the glacier you simply walk along, poking at thin bits of ice to test them - it's very easy. In fact the only section where much skill is needed is on the rock face. Graphically, the climber and the mountains are adequately represented. Ultimately this is a mixture of sections which don't quite gel into a complete game - a brave attempt at a sport inherently difficult to implement.

Final Assault is certainly an appropriate name because your first game will doubtlessly be your last. It has no addictive qualities at all, due to monotonous gameplay and pathetic graphics. Admittedly there's an element of strategy in picking your stores, but mostly it's just sticking a pick into the ice and hauling yourself up.

No addictive qualities at all, due to monotonous gameplay and pathetic graphics.