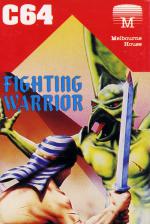 Fighting Warrior is from the makers of Way Of The Exploding Fist and though the similarity of style cannot go unnoticed, Fist is in a totally different class.

Living in the deserts of Egypt during the age of the Pharaoh's our hero has only a sword to fend off a multitude of enemies who are guarding a princess who is imprisoned in the temple.

There are three backgrounds to the action; two outdoors and one inside the temple itself. As you defeat your opponents, a vase will appear which must be smashed by a sword to gain the curse or blessing that is contained within. The contents of the vase may increase or decrease your energy level, prematurely force you into a fight with one of the gods, take you magically to the doorway to one of the other zones or remove the invisibility spell from the princess.

Before you can complete the game, you must have fought at least one member of each type of guard and have completed the first two outdoor scenes.

Fighting involves skillful use of the joystick or keyboard keys. If the fire control is pressed, the moves are aggressive swipes with the sword to the head, body or legs. Without the fire button the warrior moves forwards, backwards, jumps or ducks. As each blow is landed, an energy gauge is decreased so you can see at a glance how your strength compares with your enemy's.

Despite the excellently animated graphics, I soon began to tire of trying to fend off human and dog-like foes but the challenge may have its takers.

Despite the excellently animated graphics, I soon began to tire of trying to fend off human and dog-like foes but the challenge may have its takers.