Published in Your Sinclair #53 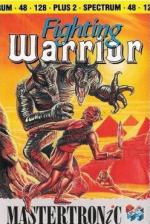 I thought this rang a bell, but it wasn't until I loaded it up and saw the dread words "(c) Melbourne House 1985" that the ghastly truth dawned on me with the force of a small nuclear explosion.

AAAAAAAAARRRGGHH! Yes, it was a cheesy old beat-'em-up. And not just any old cheese, either - fine, smelly, slightly green old cheddar, of the sort that mice might just gobble up. For it's time, admittedly, this was impressive - large sprites, a scenario that made no mention of Japan or China (it's set in ancient Egypt instead), and simple no-holds-barred violence throughout. No surprises that it sold well, but nowadays it looks more than a mite ropey. For once thing, we like a little more to our fighting games these days - think of the Renegade trilogy, for instance. As a piece of Spectrum history it's interesting, even (for us old 'uns) a little nostalgic. But as a game it no longer cuts the mustard.

For its time, it was impressive and no surprises that it sold well, but nowadays it looks more than a mite ropey. As a piece of Spectrum history it's interesting.