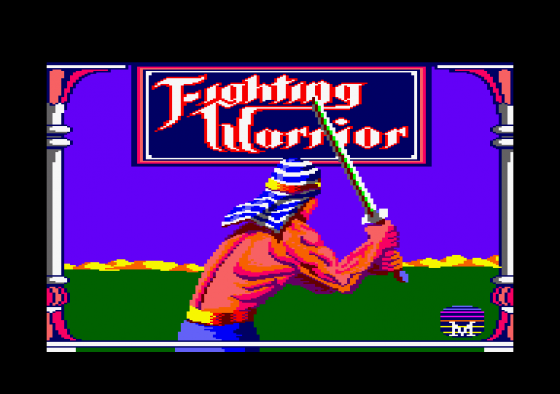 If you thought Egypt was all about romantic boat rides down the Nile, bathing in ass's milk and flirting with Cleopatra then think again, because here it's all about blood, guts and hacking people up with a sword. It's all in the name of rescuing a beautiful princess but don't let sentimentality like that get in your way.

You control Fighting Warrior, the champion of Egypt, who has to battle past a whole series of devilish opponents in order to reach a temple in which the princess is imprisoned. Most of the action takes place against a scrolling backdrop as you walk towards the temple. The scenery and enemies that comes to fight you are colourful and very detailed but the fighting is the real nitty-gritty. 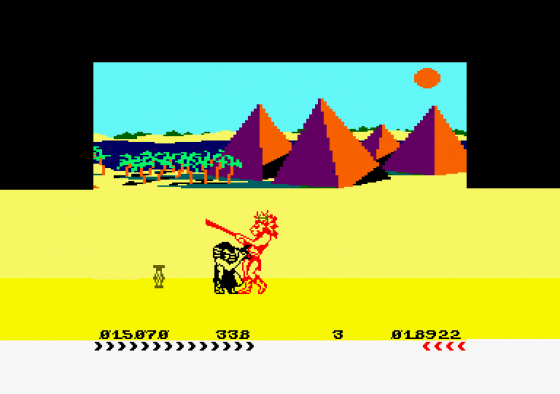 There are three basic sword strikes: up, mid and low. There are also two avoidance moves of jumping or ducking but these aren't very useful in fights. Two energy bars count down with each successful strike and the first one to run out keels over and expires. Each strike also results in a satisfying thwack and a spattering of pixels on your opponent. The violence of hammering your sword across the enemy's head may not be wholesome, but if you're in the right mood it can be terribly satisfying.

As a fighter nears death he starts to flash different colours and all hope is lost. Defeating an opponent will replenish some of your energy but tough opponents may leave you very weak indeed in these circumstances you may resort to hitting one of the magic vases that lie along the path. These can have good or bad effects like helping or harming energy and killing or reviving an opponent. There seems to be no way of identifying which vase does what though, so it's a case of pot luck if you have to resort to it. 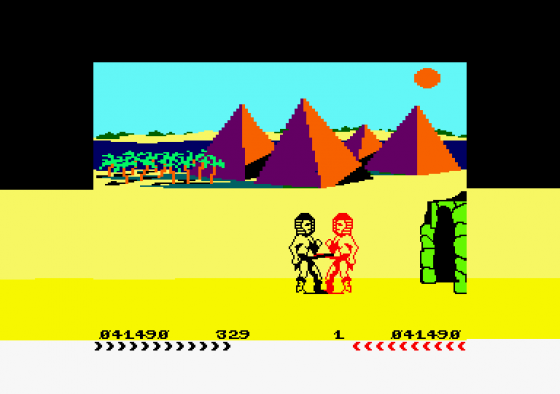 Arrows are another problem because they fly across screen and reduce your energy if they strike you. This means you have to duck or jump them, which in the middle of a fight leaves you wide open to attack. If your opponent ducks or jumps then it gives you the chance to get in some free blows as he cowers before you or leaps acrobatically in the air.

The fighters have some curious habits - one of them leaps into the air and spits his tongue at you while another one shields itself with two scaly winds and does flying kicks at you. This last beast is the one you will encounter in the temple but dealing with him there is a very tall order.

Slicing away with the sword was very enjoyable at first but as you progress to the temple and play more games it tends to get samey. There's certainly plenty of challenge but I didn't find this as fast or addictive as Fist. Still a good game though with the graphics and animation being its best point.

The violence in this game fair made my stomach churn - which is not to say that I didn't enjoy it. It's very exciting to begin with as you hack, chop and thrust at the vicious foes. The accompanying sounds of flesh being rent are truly disgusting. But as you progress - or not - it gets rather dull. When, you begin to wonder, am I going to get near my goal? Well, don't ask me, because however much I persevered, I didn't seem to get any nearer to saving my beloved.

As you progress, the game gets rather dull. When, you begin to wonder, am I going to get near my goal? Well, don't ask me, because however much I persevered, I didn't seem to get any nearer to saving my beloved. 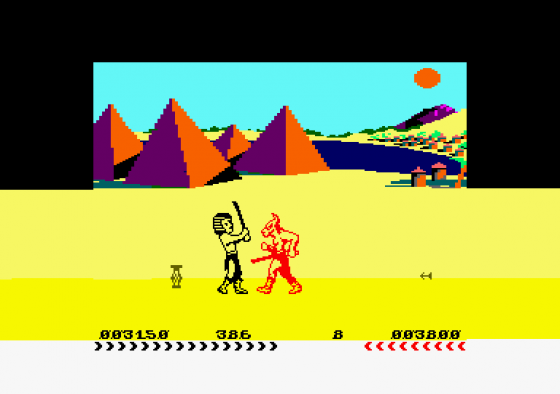