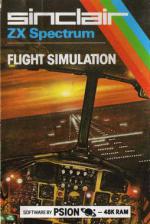 Of the many uses the Spectrum can be put to, flight simulators seem to have the most lasting appeal and probably utilise its considerable facilities for memory, colour and graphics more than any other type of commercial software. Two of the best currently available have been produced by two very different software houses: Psion and Digital Integration. The former has many good quality games to its credit whereas the latter has only appeared on the Spectrum scene recently.

Seen on the shelf, Psion's Flight Simulator has a considerable and unmistakeable headstart on Integration's Fighter Pilot as its cover design is a much more eye-catching and tempting piece of printing. The next aspect of the products which is always taken into account is the price; in this case they are both a reasonable £7.95 which should not deter the would-be flying ace.

Documentation is both thorough and precise for the two packages although Fighter Pilot's is slightly superior in that it contains pilot's notes and technical data as well as the usual instructions. The notes give advice on your approach, flaps and undercarriage and informs you of your take-off and stall speed. The aircraft's performance and specifications are dealt with in the Technical Data.

Flight Simulation does not have provision for a joystick although it is possible to use the Kempston device with the aid of a conversion tape. On the other hand, Fighter Pilot can incorporate one of three: Kempston, AGF and Sinclair Interface 2 (as well as the keyboard).

Both programs load in just under four minutes and result in a list of options. In Flight Simulation, there are three: In-flight final approach and take off. Having made your choice, you are asked whether you require wind effects or not (the novice should decline as it makes the game considerably harder). Fighter Pilot boasts a more extensive menu containing five options: landing practice, flying training, air-to-air combat practice, air-to-air combat and blind landing. As well as this, you have the choice of cross winds and turbulence, your pilot rating and controls.

The Fighter Pilot instruments, from left to right, are as follows: radar and compass which includes your compass bearing and distance in relation to either one of eight beacons or an enemy bomber, depending on whether or not you are in combat mode. Next comes a digital speedometer beneath which sits the flap extension indicator. In the middle of the panel is the artificial horizon which shows the roll and pitch angle of your aircraft with respect to the ground. Below this is a linear thrust scale followed by digital altitude and vertical speed indicators. Adjacent to these is the Instrument Landing System (ILS) which doubles as a flight computer. On the far right of your console is the fuel gauge, below which is the undercarriage status indicator (i.e. up or down). Finally comes the ammunition indicator and "kills" so far.

The Flight Simulator instrument panel is somewhat similar but consists almost entirely of dials, which can be confusing when the hands rotate more than once. The controls are from left to right: an ILS below which is a radio altimeter which displays your altitude digitally when it is less than 1,000 ft. Beneath this is an undercarriage status indicator adjacent to which is a flaps indicator. Above this is the airspeed indicator which displays your speed in knots. Next comes the RDF clock. This is the principal instrument in your panel and shows your current bearing and your position in relation to your present beacon. Below this there are three digital locks showing your present beacon, your distance from that beacon and its bearing in relation to your aircraft. The altimeter comes next and this is a dial with two hands; the longer giving the height in hundreds of feet and the shorter in thousands. Finally there are the fuel and power indicators.

The maps in both programs are very impressive although the Fighter Pilot one is bigger in order to accommodate the much more powerful aircraft. Both maps are wraparound affairs which can be very confusing when crossing from one side to another. The Flight Simulator map covers 12,288 sq. miles and has two runways: club and main. It has seven beacons, one range of hills (1,000 ft high) and three lakes: Orb, Long and Tri. The Fighter Pilot map covers 20,000 sq miles, has two ranges of hills (3,500 & 2,000ft high), eight beacons and four runways: Delta, Base, Zulu and Tango. Unfortunately, when one displays the map in Flight Simulation, one loses the instrument panel, thus making prolonged periods of airborne navigation impossible.

There is no sound in Fighter Pilot and hardly any in Flight Simulator (only when you crash) although I am sure more users would rather sacrifice audial effects for the excellent graphics in both programs.

The object of Fighter Pilot (that is, when air-to-air combat has been selected) is to defend the four airfields from destruction by simultaneous enemy bombers which, although of an inferior performance, are capable of devastating effects on both the airfields and your plane. The only aim we could see in Flight Simulation was to educate the user in the art of flying (which it does admirably). However, we would advise the would-be pilot to consult a flying manual if he is seriously considering flying!

Although we have not dealt with Flight Simulator and Fighter Pilot to their full extent, we have tried to cover most of the important points. On the whole, Fighter gives more satisfaction, even though its landscape graphics are inferior. Its controls seem more responsive and we would like to conclude in saying that although both programs are good, Fighter Pilot is more exciting and thus slightly better than its counterpart.

Fighter Pilot gives more satisfaction than Flight Simulation, even though its landscape graphics are inferior. Its controls seem more responsive and we would like to conclude in saying that although both programs are good, Fighter Pilot is more exciting and thus slightly better than its counterpart.