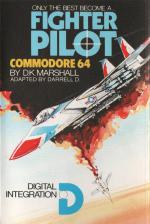 Fighter Pilot is regarded as a classic for the Spectrum - and is a classic on the Commodore 64.

The Commodore version has all the elements of the original chart-topping game with the added advantages of improved graphics and sound.

The game is based around the USAF F-15 jet fighter - and the screen display shows some of the instrumentation you'd actually find inside one of these hi-tech fighter aircraft.

The game is quite simply an accurate simulation - within the limitations of the Commodore of course - of what it's like to fly one of these jets, with some combat options thrown in for good measure.

The menu has several options which take you through an essential flight training program. Beginning with landing practice, the options then move on to flying training, air-to-air combat training, actual air-to-air combat - where the enemy fires back! - and a blind landing sequence. You can also add crosswinds and turbulence to make your life even more difficult and there are skill levels ranging from novice to ace.

Once you are up in the air you can call up a map of the area you are flying over to check out your position or the positions of enemy aircraft if you are in combat mode.

Documentation on the cassette inlay is good and you'll need to spend time studying it and the game before really getting into action in the combat zone.

Fighter Pilot is definitely not one of those games you can load in and play immediately - unlike Flyer Fox, the other flight game for the C64 reviewed here.

Graphics are up to standard for the C64, although I would have liked instrument graphics to be bigger and bolder.

And who added the dreadful music which plays while the game loads and continues over the title screen? I think the game could definitely do without this!

Fighter Pilot is a game for flying addicts or simulation freaks who like a game which they can really get their teeth into.

A game for flying addicts or simulation freaks who like a game which they can really get their teeth into.