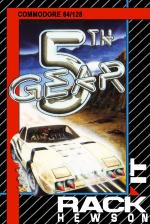 Ever thought motor racing was a pretty pointless sport? Well, motor races don't come much more pointless than this one - just drive to the end of a course, turn around and drive back. But (and this but is about as big as that of the fat Houghton) this is an illegal, no-holds-barred race through country which will test the mettle of the drivers and the metal in their chassis.

Your progress in the race is viewed from above, and the joystick controls steering and acceleration in forward and reverse gears. You start the game with $10,000 to use for buying extra weapons and equipment, fuel and repairs at shops and garages on the way. When, or if, you finish the race prize money is awarded, allowing you to turn your car into an unstoppable race machine.

While Paul raved about this game, there I was struggling on a small screen area packed with obstacles hampering progress because you have to drive veeeeeery slooooowly between them.

I'll admit that I did enjoy the Dukes Of Hazzard-style river leaping, and the extra equipment certainly adds to the fun.

The graphics and sound are very nice too, and if you can get used to the control method (which is *quite* easy after a bit of practice), there's a good bit of fun to be had from Fifth Gear.

Although this game looks like Spy Hunter, it has more of the appeal of Steer And Go (anyone remember that?), but with blasting too!

It demands quite a bit of skill too, because the number of obstacles in the small play area prevents you from diving too fast until you've mastered the control method and know what to expect from the road ahead.

All that only takes a few games, though, and after that I was really hooked. In fact, it would be almost true to say that this game drove me to distraction (Who says Tarbuck's old hat?).

Presentation 69%
Smart high score tables and menus. Control takes some getting used to.

Hookability 75%
Some setbacks to immediate enjoyment, but once you know what to expect from the game, it's good fun.

Overall 78%
Playable and addictive blend of racing and blasting.

A playable and addictive blend of racing and blasting.