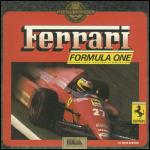 Ferrari makes some of the fastest and stunningly designed sports cars in the world. The Italian car manufacturer (owned by Fiat) also participates in the glamorous sport of Formula One motor racing. But with glamour comes danger: witness Gerhardt Berger's horrific crash last year, caused by a faulty steering system. It only went to prove how the life of a driver is firmly placed in the hands of his mechanics every time he races.

However, as Ferrari's newest driver, you're not as trustful. You insist on testing the car thoroughly at the Ferrari test track in Fiorano. Here, you can analyse the car's aerodynamics in the wind tunnel, adjusting the front and rear aerofoils to create maximum downforce with minimum drag. In the dyno room you can test your engine, adjusting the revs, turbocharger, and engine age - and monitor the effect on horsepower, torque and fuel efficiency. Fiorano's test track allows you to measure the car's performance (and your driving skills). There are 45 special sensors placed around the track - you are given a split time from each sensor to compare with previous laps.

Each race track has a paddock area (shown from overhead) containing such things as the garage, pits, race control, and transport trucks - selected by moving a pointer over them. At the start of each day it's advisable to visit the garage to install a new engine and, in the pits, adjust various parts of the car (engine, gearbox, suspension and tyres) to suit the track and type of session. To help you decide, your faithful mechanic Mauro makes suggestions for the optimum settings of these systems.

Once on the track, control of steering and acceleration/braking is via the joystick (the original Amiga version used a mouse). Changing gear is achieved by pressing fire with up/down (this is automatic on the easiest of three difficulty levels). A map of the track shows the relative positions of all the cars, while another display indicates your current race position and time. (C128 owners can turn off these displays to make the game run slightly faster.)

Taking a corner too fast (or ramming another car) can cause you to spin off the track - a serious crash can put you in hospital for several days, possibly causing you to miss a race. If you're not so good behind the wheel, you can choose passenger mode in which the computer drives the car - you just make tactical decisions such as choosing when to come into the pits.

This is one of my all-time favourite Amiga games, so I was pleased if a mite doubtful about a C64 conversion. Could such a complex simulation be converted without major omissions? I needn't have worried: all the features of the classic original are here. There are so many things you can do to your car, altering everything bar the paintwork.

The only slight disappointments are the slowness of the 3D track and the 'dying wasp' engine noise. However, these minor flaws fail to spoil the racing action, mainly due to its ultra-realism. The handling of the car is totally authentic: overtaking and cornering are arts to be mastered - and more often than not I found myself spinning off the track (straight into a hospital bed!).

This toughness - even on easy level - makes winning a race a rewarding achievement with the longer term objective of becoming World Champion offering an irresistible challenge. No motor racing fan should be without Ferrari Formula One.

The default distance for each race is 18km (three or four laps, depending on the track) - this can be increased up to the real-life (but gruelling!) maximum of 315km. At the end of the race, championship points are awarded for the first six finishers (out of the eight drivers). After sixteen Grand Prix, the World Champion will be the driver with the most points from his best ten races. As a whole season takes a fairly long time to complete, there's an invaluable save game option.

So they think these racing cars are fast? Pah! I can out-accelerate them in neutral. But after several crates of Vim even I found it hard to stay on the track. What's more, to get the best out of the car you have to tell your stupid mechanics what to do with it.

This makes trying to win a race with this primitive technology as sensible as being a kamikaze pilot. At first I simply enjoyed smashing the other cars off the track but when Phil had the temerity to win a race I had to prove my superiority. That's when I really started getting into the game. There's so much to it; organising your campaign to win the World Championship right from the early days at Fiorano, altering the aerodynamics and engine performance, to specially tuning your engine for qualification heats. Not one for the typically moronic human, but those with above-average intelligence might just be able to grasp it (Phil winning was obviously a fluke!).

The Amiga version was (and still is) superb and here we are with a remarkably similar C64 version, in fact it's the most faithful conversion I've yet seen. When you consider how much there was in the original, the conversion is something of a miracle.

The attention to detail in Ferrari Formula One is phenomenal. Speech at the start, a useful demo mode, the sheer quality of the graphics, a friendly icon system - this is one classy product, that's for sure!

Of course, as with all car simulations the core of the game is the racing effect and Ferrari Formula One performs admirably. The illusion of movement is convincing, the road perspective working well with speed kept up to match. It's not quite a Revs for realism but like Phil and me you can have some great times trying to reach first position!

A great game which can be as complex, or as simple as you want it.

Sound 90%
Great sampled speech and title tune. Good mixture of effects, especially in the pits. Engine noise is a bit weedy though.

Hookability 85%
At first it's hard to keep the car on the track, but the menus are very user-friendly.

Lastability 96%
An immense challenge offered by the 16-race season. Fiddling with your car is an absorbing pastime in itself.

Overall 95%
A superlatively presented, ultra-realistic simulation of Formula One racing.

Speech at the start, a useful demo mode, the sheer quality of the graphics, a friendly icon system - this is one classy product, that's for sure!