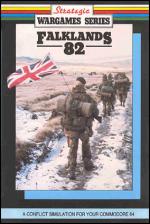 The new year brings with it one of the most controversial games since PSS's Theatre Europe. Again the game is a modern strategy simulation and again the company concerned is PSS. This time however, the conflict is in no way a hypothetical vision of the apocalypse. This one has already happened - in recent years too. Falklands 82 is PSS's attempt to recreate the brief but relatively bloody war fought between Argentina and Great Britain only three and a half years ago.

Many have felt that the subject was 'too close to home' and some felt that PSS's own tendency to include arcade type sequences into their wargames would somehow trivialise the affair. In fact, this is the first game the company has released without even the option of arcade sequences. Instead, a fully fledged wargame solely dependent on its ability to simulate the actions of what many have called the last of the Imperialistic wars, has been released.

The game comes packaged in an unusually small format for PSS, being only a conventional cassette slip case rather than their 'traditional' bookcase cover. Inside is a comprehensive instruction book, which is well presented and highly readable. The instructions themselves are not complicated and, as seems to be the norm with English strategy software, it's designed with the beginner in mind (whilst still catering for the more experienced gamer). The instructions detail all the information supplied with each unit and how it affects play, victory conditions, and all the other game-related material, with a directness and clarity which is fast becoming one of the strongest points in PSS's presentation.

Basically then, the game takes place in the northern part of East Falkland Island, beginning with the actual British landings on the Island. All the sea-sea and air-sea parts of the conflict are skipped (except for certain reports which will be elaborated upon later). Across the section of Island are ten settlements that need to be liberated by the British forces within a given number of game turns (the exact number of which depends on the difficulty level set by the player). British and Argentine forces are split up into different kinds of units of varying strength. Unit capabilities are Aggression Factor, Defensive Factor, Movement Factor and Range Factor, expressed in purely abstract terms. Units themselves are displayed in the form of redefined character blocks.

The screen shows only that part of the Falklands covered by the game with terrain markers, major settlements and installations (such as the airfield) and the four possible landing sites for the forces. Once the landing site has been selected and the forces have embarked, gameplay is incredibly simple, being a case of following prompts and making uncomplicated decisions. Airstrikes can be summoned in good weather (as can support from the task force) and the Argentinian airforce will occasionally break through your air defence and strike against one of the land units (an announced strike is not necessarily successful) or the task force itself.

Enemy units are hidden until scouted by advanced allied units or engaged in combat. One of the options for the SAS and SBS units available to the player is the Reconnoitre option, which will spot ranged enemy units. However, once play commences, things become worrying. Combat can be with any other unit in range. However, the way it is handled by the computer, using, say ,an SAS unit to back up conventional infantry against an Argentinian infantry unit, has no effect at all. Instead of recognising the kind of sabotage and confusion a specialist unit would cause while the main force kept the large proportion of the enemy occupied, the computer simply goes off attack factors and happily wipes out the SAS and commences combat between the other two. This reduces your special forces to the level of recon troops - not the most realistic of evaluations by any means.

Proximity and Zone of Control can also have weird effects if a cluster of units is located in a small area. Allocating fire missions from artillery works fairly well, but some of the randomisation factors for damage results must be unreliable when on a clear day, an Argentinian unit is attacked by air, sea, land and indirect fire, in clear terrain - and comes out unscathed! When handling orders for a particular unit, if an enemy airstrike occurs (no matter whom it is directed against) that unit loses the ability to accept orders for the rest of that turn. Why?

However, considering the game requires the recapture of ten settlements and the successful defence of those settlements one full game turn after their capture, there is no reason why, if this is achieved, the game should have to he mechanically played out for the required number of

turns for that complexity level, while your ships receive inevitable hammerings off the coast with no chance of you taking a part in their defence. Yet that is exactly what happens.

There is no option in the game to try tactics like the sabotage or attack of enemy air-bases (though perhaps such a feature would have been seen in the wrong light by those unaware of the speculative intentions of the author). There is no strategy involved, though. That's the real problem. This is the first computer wargame I've ever played on every difficulty level and won every time.

If this is the way PSS games are to go in the future, I'm very sad indeed. Theatre Europe was excellently presented if a little weak on the strategy side. Battle of Britain had the option of excluding the arcade sequences, and the result was a highly respectable wargame. Having said that, if you left them in and played the game with your eyes shut, it would probably give more credence to the term authenticity than Falklands 82.

Presentation 75%
Simply but effectively laid out and remarkably easy to use.

Graphics 60%
Sharp map of East Falkland Island but little else. Unit displays are nothing more than a joke.

Instructions 62%
Easy to pick up but woefully lacking in areas of important details and 'historical' notes.

Authenticity 39%
There isn't any - unfortunately.

Playability 64%
Rather surprisingly considering the limitations of the game as a simulation, it's quite playable if you're a total novice.

Value For Money 33%
Far too undemanding and trivial.

Overall 34%
Despite the fact that this isn't the tasteless farce everybody thought it would be, it's still nothing other than a trivial misguided effort with little to offer except for the most unconcerned beginner. I still find it hard to believe PSS bothered to release it.

A trivial, misguided effort with little to offer except for the most unconcerned beginner... Hard to believe PSS bothered to release it.