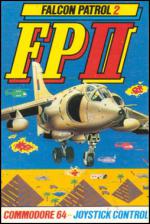 About six months ago, a game called Falcon Patrol entered the software charts and became quite popular. The object of playing was to fly your Harrier jump jet over a military terrain and shoot other jets out of the sky.

Virgin Games has now released a sequel - Falcon Patrol 2. In this version you must shoot at helicopters of various types. The game is made more difficult by the fact that you may fly faster than the helicopters and can quite easily smash into the back of them.

The terrain is more varied and protrudes a lot more than it did in the original version. You will also notice that the helicopters are more manoeuvrable than you are and may stop, hover and turn easier and faster than you.

Other additions are flak batteries and radar jammers. I have found these to be quite difficult to overcome - they're a good feature.

The graphics and sounds have been improved and will take quite some beating. Most of the minor details lacking in Falcon Patrol 1 are now rectified.

Most of the minor details lacking in Falcon Patrol 1 are now rectified.