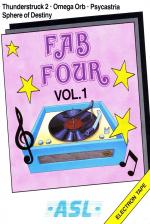 Publishers sometimes yield to the temptation of watering down compilations with an offering that's below par. Not so this pack, which features four games from two of the most talented individuals in Gamesland, Gary Partis and Peter Scott, two programmers with contrasting styles but comparable skill.

Even if you already have all these games, there's something for you here, as Gary Partis' offerings, Psycastria 2 and Sphere Of Destiny 2 are, to coin a phrase, 'remixed' versions of the classic originals, now even more playable then before, and with screens not seen before in Psycastria 2.

The Partis forte is creating games which call for lightning fast reactions, whether you're controlling a peaceful bouncing spherical object or shooting 'em up from a novel perspective. There's little subtlety here but plenty of action.

Flip the disc and you're in a different world. Peter Scott's Arcade Adventureland, with all his usual trademarks - amusing animated action hopping about all over the place, realistic fiendish puzzles and novel touches such as a computer you can interrogate with its own language.

The animation is so realistic and the characters so lovable, you're soon involved enough to care deeply about their fate, whether you're playing the stranded weaponless spaceman in Thunderstruck 2 or the cute but deadly bouncing creature in Omega Orb.

Both games work on the principle of contact with nasties decreasing energy levels rather than spelling loss of life, which means that you don't have to be absolutely perfect while you're learning.

One of the very best compilations yet for Beeb and Electron. Very highly recommended.

One of the very best compilations yet for Beeb and Electron. Very highly recommended.
Logout