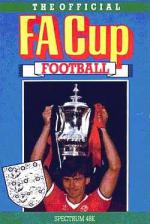 Now the dream of your favourite team lifting the FA Cup is brought a little closer with the official FA football game.

The road to Wembley is a long one and so to give you a chance of being in the later rounds you begin the game with a choice of ten teams. This may seem a lot but believe me they'll soon either play each other or get knocked out.

The system we worked out in the office was that each player selected two teams from each division and two non-league sides.

You can then skip straight to the third round where the 1st and 2nd division sides join in but your lower teams may not have made it through.

For the full excitement and atmosphere you should play the whole game.

Before each match involving your teams you must decide on the style of tactics they will play. Playing deensively won't get you through a tough away match. The opposite is to go all out for goals which may leave you open for an embarrassing trouncing. A balanced attack is a good middle ground but will it be enough to win?

Once you've picked your tactics, the games are played. The screen changes to a list of the games being played and their current scoreline. This is updated as the minutes tick away. If you can't stand the waiting, leaning on the space bar speeds the clock up.

When the final whistle goes, you'll know the fate of your teams.

After any replays are decided, the remaining teams go into the next round.

The game cleverly increases the excitement from round to round by increasing your involvement in your team's fate. In the fourth round you have an opportunity to change your tactics at half time, in the sixth round (quarter finals) this is increased to twice per half. As the final approaches each player is presented with situations to resolve such as what to do with a star striker who wants a transfer before a crucial game. How you deal with it can affect your team's morale and performance. Then finally, to give you something else to worry about, you have to decide whether to send in a substitute with only 20 minutes left in the game.

Finally, there are only two teams left to battle out the FA Cup final. After a quick rendition of "Abide with me" the game begins.

Despite the lack of graphics, sound effects or even joystick-controlled players, the game is ridiculously addictive. Somehow it manages to capture the excitement of the cup.

Despite the lack of graphics, sound effects or even joystick-controlled players, the game is ridiculously addictive. Somehow it manages to capture the excitement of the cup.