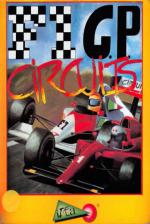 "And it's Nigel Mansell in the lead going into the final lap, he simply must win now... whoops his gearbox has seized up again!"

Well, that's Grand Prix racing for you, a combination of driving skill, mechanical expertise and sheer luck. In F1 GP Circuits, you can drive for any of four 'fictional' teams, each with its own strength: the Ferrari car is fitted with the best engine, McLoren with the best chassis, Williams with the best tyres and Leyhouse with the best brakes.

The Grand Prix season starts in America. As in the real thing, you have to set a qualifying time to determine you position on the grid at the start of the race. The race view is from overhead with the track scrolling downwards. Of course there are plenty of twists and turns in the road, but these are 'signposted' in the panel above the playing screen. There are nineteen opposing computer-controlled cars, and these are swines to pass as they swerve all around the track. Collision with these causes the car icon in the lower left corner of the status screen to change colour.

This is your damage indicator and as the colours on each part of the car change from white to yellow to red and finally black it's time to visit the pits. These are positioned just behind the starting grid, and by pulling off the main track the pit screen appears. On the left side is your car, surrounded by the mechanics and to the right of the screen appears a list of car parts, Tyre, Chassis, Brake, Engine and the all-important Fuel. By clicking on the necessary icons the pit team get to work their spanners, screwdrivers and sledgehammers. When finished, click on Go and it's back to the track to complete the five laps that make up each race.

At the end of the race, World Championship points and bonus cash are awarded to the top six drivers. In the first three races (USA, Brazil and San Marino) you must qualify in the top ten places to avoid the dreaded 'game over' message. But from then on the more points you possess, the more change you have to survive. As your cash builds up, it's a good idea to visit the shop to improve your car's performance with four grades of tyres, chassis, engine and brakes for sale.

F1's decent title tune and neat presentation leads you to think that this may be a racing game in the Pole Position/Pit Stop league, but sadly it isn't that good. The car sprites are attractive, but can't compensate for the simplicity of a purely vertically-scrolling overhead view perspective. The bends aren't that difficult to negotiate - obviously - and the continual flipping of the disk version is a tad annoying (I hate to think what tape will be like!).

And although the game is initially fairly playable, there isn't really enough of a challenge to keep you playing long enough to reach the final race in Italy. Once you work out a technique how to get past the psycho drivers, tedium soon sets in.

F1 isn't quite as bad as it looks. There's no real strategy other than choosing which car parts to buy and when to visit the pits, but the simple driving section is quite fun to play.

I reckon the computer drivers all went to the Ayrton Senna school of motoring - they certainly don't mind shunting you out of the way or just ramming you off the track!

Frustration is eased, though, by the way your car can take loads of damage before finally conking out - I think old Nige could do with one of these.

Graphics 54%
Adequate car sprites, but the backgrounds are very samey.

Hookability 57%
Initially, roaring round the track, setting records and winning races is fun.

Lastability 52%
But tedium soon sets in due to repetitive gameplay and graphics.

Initially, roaring round the track, setting records and winning races is fun. But tedium soon sets in due to repetitive gameplay and graphics.
Logout