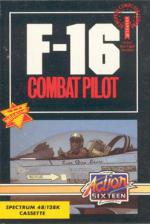 The amount of detail that's packed into some Spectrum games never ceases to amaze me. How anyone can knock the old cat sized coffin after seeing a game like F-16 is beyond me. Let's face it, it's time to put down your Action Man, take the jet by the throttle and head off into the wild blue yonder!

Not even a drunk, bow legged, Outer Mongolian Feudal lord, with a PHD in Kamikaziism, could wish for more missions. Just when you think you've earned a rest, when you've finally completed the first five sorties, there are a whole lot more waiting to be discovered. Bomb enemy installations, cut off radar transmissions, locate and destroy whole battalions of tanks and enter dog fights 2000 feet above ground in pitch darkness, with infra-red heat seeking missiles. Every conceivable scenario has been catered for. Then finally, once you've mastered your own fighter, you can lead an entire squadron on a plethora of missions!

The sim can be as in-depth or instantly accessible as you want. There is even a special facility called 'Quick Start' that lets you bypass all the preflight briefing and get straight down to the fight. In fact most options can be controlled by the computer, leaving your hands free for the important parts of the game like picking off an enemy EWR site with a radar-guided anti-radar missile.

On the techie side there's a fun, switchable Head Up Display unit (HUD) and enough on screen LED's to make the crew of Star Trek Jealous! All systems are fully monitored with switchable screens, whilst below, a comprehensive damage menu makes sure you're always home in time for tea, if you keep tabs on it that is!

F-16 was a great buy nine months ago and now it's a steal. Rumor has it that the program taught Chuck Yeager everything he knows, personalally I don't believe this rumour, but it sounds good enough to include here. On disk or cassette this is an essential addition to any collection.

First rate air combat sim. The atmosphere's so rife you could grill a burger held up against the screen. F-16 is quite simply the most detailed, accurate and exciting flight sim you can buy. Nothing has been over-looked in the quest for Spectrum excellence.

A first rate air combat sim. The atmosphere's so rife you could grill a burger held up against the screen.