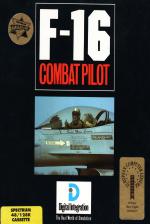 It's tally-ho chaps with the latest Digital Integration air combat game, F-16 Combat Pilot. There are plenty of missions to fly, including five warm-up ones, all of which must be completed before tackling the biggie, codenamed Operation Conquest.

After the controls have been set, a second option screen appears. Here you can switch on the training mode (which prevents the enemy from harming you), log into the pilot roster and select a mission; you can choose from Scramble, Hammerblow, Deepstrike, Tankbuster and Watchtower. You then receive your pre-flight briefing to identity your targets.

Before taking off, pick up a selection of weaponry from the hangar. Choose from a Vulcan 20mm six-barrel cannon, Sidewinder and AMRAAM air-to-air missiles, Maverick and HARM air-toground missiles, and chaff and flares for defence You can load the weapon pods yourself or leave the ground staff to choose the most effective load for the selected mission. Then off into the wide blue yonder to kick some butt (after a quick read of the hefty control manual, of course).

As with most flight sims, the joystick is only used to steer the plane - most of the HUD (heads-up display) operations are accessed by the press of a key. Control of the plane is very good, scrolling is fast and though ground detail is sparse, cockpit displays are detailed.

I was able to keep the plane in the sky more easily than with previous flight sims, although make no mistake about it, the live preliminary missions are just a taste of what's to come in Operation Conquest.

F-16 Combat Pilot is more for simulation aficionados than general gamesplayers, so it's a case of you either loving it or getting very confused by it all. Personally, I love it.

'If you're like me and think most flight simulations are the same, you wouldn't be far from the truth. Looking at the main section of F-16 Combat Pilot it's a lot like endless games I could mention. There are a variety of missions to fly and you can choose day or night, cloud or clear. The truth is that whichever options you select you'll spend the majority of your playing time staring at blank green ground, straining to make out what the cluster of blobs below are meant to represent. F-16 has some impressive presentation and option screens, which puts it ahead of its competitors. The damage control and weapon select are particularly good. Flight sims never work that well on the Spectrum, but Digital Integration have packed a hell of a lot in and have done a first class job.'

Flight sims never work that well on the Spectrum, but Digital Integration have packed a hell of a lot in and have done a first class job.
Logout