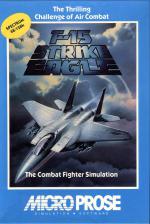 Dan diddly dan dan dan diddly diddly dan... you'll be the best. Better than the best. You'll be a Top Gun and you'll even look (and act) better than Tom Cruise. You'll pilot the F-15 Strike Eagle. You'll know it intimately. You could fly it with both eyes shut - though you'd probably crash. You'll have S20,000,000 of specialist equipment under your fingertips, and (this is the clincher) you'll be able to bomb any commie pinko rats who get in your way. Now, to enter this elite, a simple eyesight test. What does it say...?

Aw shucks, I failed the eyesight test. Perhaps it's because I didn't vote Republican. Never mind, I'll play the Microprose version instead. Right, load it in... dum de dum de dum.. Wow! They've printed on the border! Oh, it's just colours. Where are we? Right, this button does this, this button does that and I'm off. Hang on, what the hell is the triangle? It's a plane? Come off it! Lets read those instructions again...

Ahem. F- 15 Strike Eagle is not as good as I expected Opening the package, I found a 40-page instruction manual, with an extra piece of card explaining the differences between versions for the Commie 64 (die, pinkos) and the good ol' natural-as-mom's-apple-pie Speccy. One of these is the security code. This consists of the numbers 1 to 16 with each number corresponding to a letter of the alphabet. When a number pops up on the screen, you press the relevant letter. That'll really stop the pirates. Anyway, when you start playing the game, you have about 20 different buttons to memorise - as well as the joystick!

So you're ready, are you? Good. Press FIRE and (after deciding which mission to take) you're off. (There are eight different missions, from Hanoi - gooks - to Libya.)

The first thing you see is a triangle. It seems that the planes are triangle-shaped - if they're too far away to be seen, little squares pop up around them. Same with missiles, though they have 'M's inside the box. You're given various means to wipe out these pests, from guns or flares to hellfire missiles!

The graphics are, well, functional. It's hard to get too excited about the game, as there are loads of very similar games around for a similar (or lower) price - Tomahawk springs to mind. Gameplay is slow, and several times I found myself diving towards the ground, unable to pull up. Granted, it's cheaper than the real thing, but after a while there's no real challenge and you get bored. Perhaps this very complex sort of game isn't really suitable for the limited capabilities of the Speccy. Or perhaps it's just boring. My guess is that you'll find it's only the price that 'Takes your breath awayyy...'