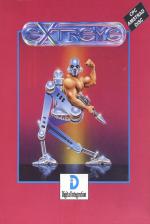 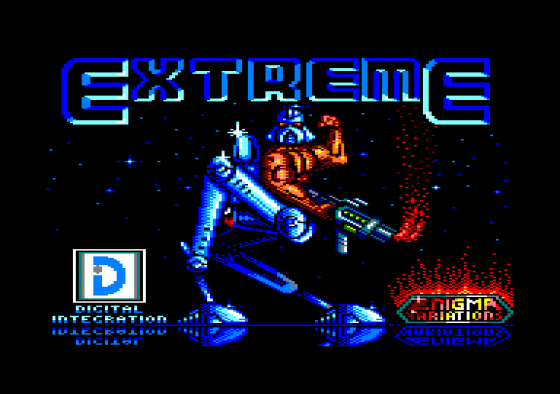 Having your legs ripped from your torso isn't at all appealing to most people. But then you're not most people, and if that's what it takes, you're prepared to go to the extreme...

It's your mission to defeat... but no, really, it doesn't matter what your mission is dammit, there's killin' to be done, and you're just the half-man to do it! 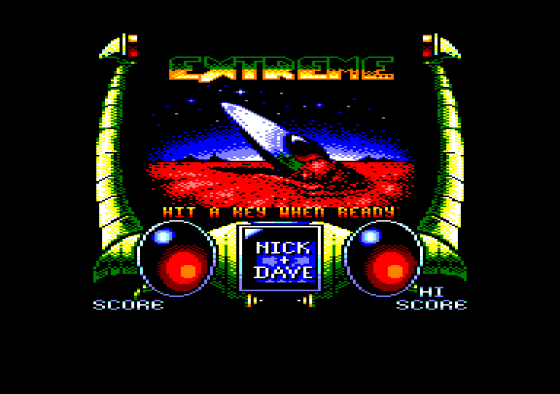 The problem of having no legs is neatly solved by a selection of clip-on cyberparts, adapted to suit the different situations you find yourself in.

The first of your tasks is to carry an energy sphere from one end of a spaceship, and plonk it into the correct receptacle at the other end. It seems that the best equipment to do this is a set of caterpillar tracks and matching jetpack (they always did go so well together).

It isn't going to be easy. There are seemingly impassable barriers, red-hot molten lava (why there's such a thing on a spaceship is a mystery!), and plenty of energy-draining baddies that get in the way. To top it all, a strict time limit has to be complied with or your planet will be destroyed (yes, it would be, wouldn't it?). 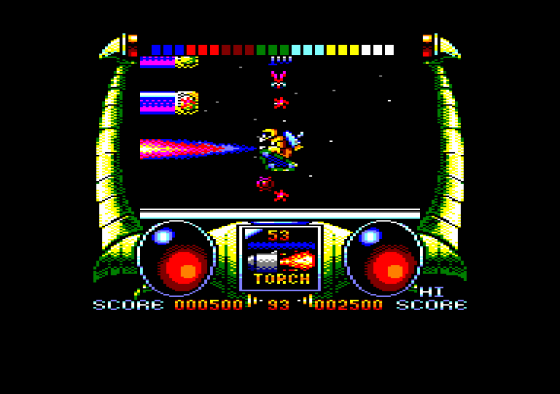 Manage to avert disaster and you'll find yourself being submerged into a glorified fish tank. (So you slip into the all-in-one body suit - just perfect for those underwater occasions!) All you have to do is get through the hatch directly below you at the bottom of the tank. Unfortunately, it's stuck, so you'll have to undo it with a spanner (handily located at the opposite end of the level!).

Unfortunately, the fish tank is infested with fish. (What did you expect?) Well, at least you can blow them away with your flame torch... ah, well, no you can't actually. It doesn't work underwater (too wet, you see). Floating around the pool are mines. Bumping into them sets them off, but surprisingly the resulting explosion doesn't harm a hair on your head (so if you're overwhelmed by fish you can head straight for one to kill them).

Open the hatch and all the water is drained out - you along with it. In the next stage you sprout a gigantic pair of legs... (Knew they'd come back into fashion one day.)

The three levels are very different in gameplay and look, despite being variations on the same theme. There are a few minor puzzles to work out in the first section of the game, and lots of aliens to kill! Your standard armament on the first level is the flame torch. A quick stab of the Fire button will incinerate any nasty that should stray into your path. Energy is lost if you're careless enough to collide, though.

Luckily, both weapons and strength can be replenished by returning to the level's starting point.

The energy sphere (or whatever it is) is dragged along by means of a rope that extends from your body. It moves according to a pre-determined path, and only when you can see it on screen. It also moves at an infuriatingly slow rate. So to get it to your destination you also have to move at a snail's pace. This makes you vulnerable to attack from the space critters that infest the place.

An altogether different technique is required on Level Two; you've got to move fast to avoid the ferocious fish. Though the mines can be used to blow them out of the way, you'd be wise to conserve them for use on the way back to have any chance. It's a short level, just there and back again as fast as you can go, but a dangerous one. Hit a shoal of fish when there isnt a mine in sight and you've had it. The big legs of the third level move you at a fair old pace, and you're armed again, this time with a plasma gun. You can destroy most things with this weapon, but if anything should get past the gun. then there's little scope for out-manoeuvring them.

Technically, the game is brilliant. The sprites start off pretty huge in the first level and simply get bigger as the game goes on. You'll not want for colour either. Extreme uses every one of those sixteen colours available in large, well-defined sprites and detailed backgrounds. The scrolling too is smooth as silk, and some lovely effects have been implemented. (Such as the words "Energy Low" in screen-high lettering when you damn well know it!)

So, there are three very different sections, providing plenty of variety. Once you reach a new level, you'll naturally be a bit unsure of what to do at first. This is where Extreme can be a wee bit cruel, for you only get one life. As you sit there, all confused and bewildered, you tend to get slaughtered, and it's back to the very beginning. Another couple of lives wouldn't have gone amiss, nor would some kind of restart system. Very frustrating. Still, these shortcomings are very minor when judging the game as a whole. If nothing else, an awful lot has been crammed into the game (*and* it's all one load, tape owners will be glad to know!), and it's very slickly presented.

For looks alone, Extreme is worthy of a place in your collection, and on top of that it's an extremely good game!

There's something rather quaint and old-fashioned about Extreme, but that doesn't prevent it from being a very, very good game. It's colourful, tough and rather frustrating (what with having only one life) but highly playable.

Graphics 93% Large and colourful graphics that get better and better as you go along.

Grab Factor 88% Amazing looking and easy to pick up. You can play straight away.

Staying Power 79% There's plenty of challenge, but some may find it tough.

Large and colourful graphics that get better and better as you go along... Technically excellent with great visuals, but a little frustrating perhaps. 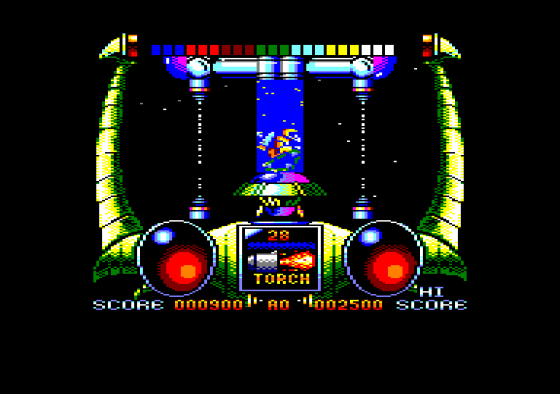