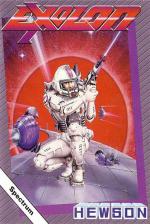 The shoot 'em up is back in style, from the most basic blast-everything-that-moves scenario to sophisticated multi-weapon spectaculars that require the digital dexterity of a concert pianist.

But Exolon adds a new dimension to the genre. It's nothing like the never-ending waves of Galaxi-Defendas that most of us cut our teeth on, but it doesn't shoot itself in the foot by being so complex that you need a PhD before you can start blasting. The secret is that the squidgy spacecraft has been replaced by one king-sized, individual hero, who walks the surface of the planet, jumping and ducking to dodge the shots and missiles of the singularly unfriendly aliens. You have to clear obstructions, decide on the best path across the surface, and even have to choose your clothes!

This is the sort of hand to hand combat that Rambo revels in. It's one man, his laser and grenades, against everything the enemy can throw at him.

The simplest of these to solve are the rockets and boulders which block your path. Hold down fire to launch a grenade and reduce the rocks to rubble. Unluckily there's very little else on the planet quite so passive.

You can blow up single shooting canons fairly easily, but double barrel blasters are more tricky as they can't be shot. Instead, get past them for a healthy bonus. There are also missile guidance orbs which you have to decapitate, unless you want to end up bombing out.

If you're tired of all that shooting there's one feature that you can't destroy - the pneumatic hammers, if you get caught on one of these as it shoots up from the surface you'll be propelled straight to heaven. The only way to avoid them, at least in the initial screens is to choose your moment well and march resolutely forward, praying!

If the hostile installations aren't enough, there are also aliens which fly in waves and haunt almost every screen. They come in a variety of sizes with different attack patterns. The small red ones are only set free when you blow up a birth pod, and tend to hang around.

Their big brothers drift in a sort of sine-wave curve and you may have to jump to get them - but often it's better to duck and let them float overhead. A useful hint is that the height at which they enter the screen seems to be governed by your position. The really big problem is the king size killers who loop the loop and sneak up behind you if you don't blast them on their run in.

There are missiles and android-creatures too, all of which will keep your finger twitching on the trigger... but don't overdo it because there's nothing worse than running out of ammo a screen before the next lot of supplies.

Now all of this would make up a reasonably exciting, fast moving arcade game, but there's also a level of strategy. Don't panic though - it doesn't diminish the action. You'll have to take advantage of the teleports, which shuttle you between the ground and walkways on certain screens. You'll never know which it's better to take until you've tried it... and then there's no going back.

There's also the question of how to dress for battle. Occasionally you'll find a changing room which lets you slip into an exoskeleton. This gives you added protection and doubles your fire-power but you'll lose out on a bonus at the end of the twenty five screens that make up a level.

Knowing what lies ahead is the secret of Exolon's addictiveness. Playing it is a process of learning, so that if taking the upper path turns out to be a mistake, you'll want to try again with the lower one immediately. The program plays fair too, so that you never get stuck in one of those instant-death situations that ruin certain programs.

The other great attraction is the graphics. Programmer Ralaelle Cecco was the brains behind Mikro-Gen's Equinox, but this time he's gone one better with huge sprites, sparkling colour and minimal attribute problems. The animation of the central sprite is nothing short of amazing - it walks with a real soldier's trudging step.

We've seen three versions of Exolon in the office and each one has contained something new. I loved the original but the YS Seal refused to let me review it. Then a clever bit of code gave 128K owners extra sound for the title screen and effects. The final addition has been a mini-game between levels, which tests your reactions for an even bigger bonus.

At last Exolon is ready. How do I sum it up? Three words say it all. Exolon - extreme excellence'!

Fast action with incredible graphics and constant variety. One of the best shoot 'em ups ever!

Fast action with incredible graphics and constant variety. One of the best shoot-'em-ups ever!