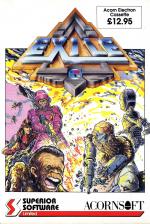 It's a rather tragic truism that almost every machine is capable of much more than it achieves over its shelf life. That's because programmers writing their first and second games gain that much-needed experience with the hardware that enables them to program later ones that start to push the machine to its limits. Sadly, technology moves on and the cycle continues anew. If the Acorn Electron had had a longer shelf life, chances are that we'd have got more games like Exile. But, by the time it arrived, the machine was past its prime and lots of people missed it. In the interim period it has of course gained a well-deserved cult status and, in my opinion, Exile is hands down the best game ever written for the Electron.

The backstory reads like the plot of a Ridley Scott movie, imagining a parallel universe where criminals are neither imprisoned nor executed for their crimes, but are instead packed onto a spacecraft and blasted into the stratosphere instead. Several decades ago, this punishment was meted out to a psychopathic DNA dabbler by the name of Triax and, us having exiled him from the Earth, he was forgotten about.

Several weeks ago, the spacecraft Pericles set out to the planet Phoebus to undertake a routine geological survey, only to cross paths with this evil overlord. Triax could not believe his good fortune - firstly, a freak storm threw him not only onto a nearby planet, but it was also a hospitable one, where he could continue his insane experiments; second, down into his lair came the Pericles, crewed by a team of unsuspecting geologists. He made short work of most of the crew - although not before they could get out one or two emergency broadcasts - and you join the game just as he aims the Pericles towards the Earth.

You are Mike Finn, and your mission is to stop Triax by any means possible and rescue any surviving crewmembers. The game is played from the side-on and runs in the Electron's four-colour mode. The game not only fills every last spare byte of the machine but also uses the screen itself for storing a great deal of data, meaning you get a small, centralised playing area bordered by a horrendous mess of multi-coloured pixels. This is, however, a small price to pay considering what that playing area actually includes.

That's because the programmers of Exile, Jeremy Smith and Peter Irvin, were themselves gods. They created, in less than 32K, a living, breathing Phoebus with mass, inertia, thrust, wind, friction and gravity. The immersion is total. There is no status bar. There are no lives. There is no on-screen help. There is no instruction on how to make your journey through the game. Indeed, there's no "real" solution - players have found that they can follow a multitude of routes through the land of the Exile. What there is, is a creation of sheer beauty.

At heart Exile is a graphic adventure. However, there are many Electron games that bill themselves as graphic adventures, and so to describe Exile as just another one is to do it a disservice. The average graphic adventure, for example, has five or six game controls - left, right, up, down and a few keys to switch around inventory items or use objects. Exile has 30 separate controls. In fact, practically every key, including the function ones, does "something". It's not, therefore, the sort of game that you can just sit down and play without a bit of study but, to be frank, you shouldn't want to. The knowledge to be gleaned from reading the manual helps to give the items and inhabitants of Phoebus some meaning.

For instance, you won't find yourself accosted at every turn by roaming nasties which you must jump over. Many of the inhabitants of the planet are actually relatively friendly - there are birds which stalk you, robots that give you energy pods, and even a cute ball of fluff called Fluffy who divides his time between being docile and clingy. But, spoiler alert, Triax isn't friendly, and he hasn't yet disposed of all of the crew either.

Finn is a dexterous character and by deft use of the QWPL keys, you can perform all manner of aerobatic manoeuvres courtesy of the jet-pack he wears on his back. And, whilst Exile's contemporaries display energy bars and give a game over message when energy hits zero, when Finn is hit by a bullet here, he is thrown backwards by the impact, and he flashes and cartwheels. There's really nothing that comes close to this level of control in any other Electron game.

Oh and it's also worth pointing out that Finn actually can't die. The only way that he can fail his mission is if the jetpack power runs out, in which case you'll have to pull out the Electron's power cable and restart, or if you manage to goof up one of the mission critical elements of the game. For example, blowing up the entrance to Triax's underground cavern. Otherwise, if Finn is taking heavy damage, he will be teleported to the safety of his ship (or one of four previously stored teleportation positions).

You start the game unable to fire, and on your first go, it will probably be at least an hour until you discover where a single weapon is. The game has quite a few of them, and once you find them (and reach them) you can pick them up and 'absorb' them into your protection suit. You can then switch between them at will, but always bearing in mind that the most powerful weapons absorb more energy than the less powerful ones. The exploration, and the 'battles' (when they occur), are really the only things about the game that can really be criticised, and that's only because the screen scroll is so jerky. Particularly in the windy areas of the planet, Finn can be flung around all over the shop, and at such speed that he seems to temporarily disappear as the screen struggles to catch up with his position.

Otherwise however, the general aim of Exile is that burrowing further and further down into the caverns is to head in the right direction. The fortitude required to reach Triax's genetic laboratory is immense, and you may well find the solutions to some of the problems will require you to read one of the excellent online solutions at times. My advice though is to use these sparingly. Read the actual instructions and the bloodthirsty novella, sure - but work out the solutions to the problems yourself if you can, you'll feel better for it.

There's so much to say about Exile that it's almost impossible to do it justice in text (and screenshots). A miracle of programming in all senses, it's the type of game that is so involved that as you continue to play it, it just keeps on amazing you. In fact, if there is one actual complaint that some players have levelled at the game over the years, it's simply that they never managed to finish it and so never saw the great bulk of the authors' genius. (Electron User magazine, when it reviewed it back in 1988, rather incredibly, scored it at only 80%, its reviewers seemingly having not progressed beyond the first couple of caverns when they put pen to paper.)

If you do go on the lookout for a physical version of Exile, be aware that, whilst it regularly changed hands for about a tenner until recently, it has recently started commanding serious moolah, especially if all cards, books, leaflets and inlays are still intact. There are also two versions of it available - a standalone Acorn Electron version and a dual BBC/Electron version, where you also get versions of the game for the BBC Model B and Master 128 on the same cassette. Predictably, the BBC versions are a lot better, being able to operate both without the crashed border and, in the case of the Master 128 version, a much larger playing area too.

A miracle of programming in all senses... A game that is so involved that as you continue to play it, it just keeps on amazing you.