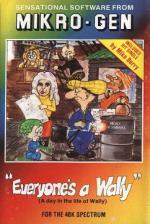 Mikro-Gen's Wally games seem to be taking on a life of their own and multiplying to form a whole series of games. However, if they're all as good as Everyone's A Wally, then I shan't be complaining.

Unlike any other arcade or adventure type game, this one allows you to control more than one character - you can choose between Wally himself, Thelma his wife and the rest of the cast of thousands (well, six actually). As all these characters wander around town they must figure out how to complete various taks, eventually opening a safe to get at their wages.

The locations in the town are all well drawn, and contains some interesting surprises. On one occasion, I took Wally into a telephone box and ended up playing some sort of Asteroids game!

The animation of all the characters is very good. They are all drawn in big chunky sprites and really do 'walk' rather than just wiggling their legs. The inevitable colour clashes occur, but the characters always remain clearly defined and solid-looking. To be honest, I've not made much of a dent in the game - so far as the instructions don't give too much away. But this is intentional of course, for, as with Ultimate games, half the fun lies in figuring out the mechanics of the game and what you are supposed to do with all the objects that you come across.

I understand that Mikro-Gen's next offering will be a game based on Wally's son, Herbert. I look forward to it with quivering anticipation.