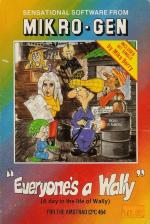 Wally Week has been making a nuisance of himself for a long time. In this latest escapade he does it in brilliant style with tremendous graphics and animation and a puzzling task to really test the mind.

In this adventure Wally has roped in four friends to help him complete various odd jobs around his home town. You have to control all five characters. You get paid for completing the jobs and your ultimate aim is to unlock the town safe where the wages are kept.

You start off controlling Wally in the town square by the broken fountain. You can switch to any of the other characters if they are on the same screen as you. If they aren't, you can find out which screen they're in at the touch of a key. Each one possesses certain skills which when combined with the right objects will allow you to complete a task like mending the fountain, building a brick wall or restoring the towns electricity supply.

Each character can carry two of the objects which are found lying around the various streets and buildings. However, some objects can't be got at unless you are already carrying another object or are controlling a particular character.

The street graphics are seen from a side view with each of the characters a beautifully detailed multi-coloured sprite. You make your way around the town by walking off the edge of screens or by moving up when in front of a street leading off at 90 degrees. You enter buildings in the same way where you will encounter lots of nasty energy-sapping creatures. Each character has three bars of endurance energy that can be replenished by eating the food found around town, but certain people like different foods.

If you die while controlling one character the game ends completely and you'll be told how much money you've earned - but you can postpone the evil hour by switching to another character when energy gets low. You're most vulnerable during one of the two arcade sequences when your energy can suffer greatly.

Completing a task should bring a warm glow of satisfaction but to finish the game will be a tremendous effort. However if you find the going too tough you can always take a break; and listen to the 'free' recording of the Every [some text missing].

WALLY: builder and odd Job man. Huge pot belly. WILMA: Wally's better half. Likes shopping, going to the library and posting things. TOM: punk and mechanic. Good with machines. HERBERT: Wally and Wilma's baby brat. Crawls round making a nuisance of himself in preparation for his starring role in the next Mikrogen title. DICK: plumber who rivals Wally in the pot belly stakes. HARRY: hippy electrician. Hates meat.

1. Brilliant graphics and animation. 2. Novel multi-character control. 3. Ingenious tasks and skills. 4. Will take a long while to solve unaided. 5. Exercises both brain and joystick. 6. A true arcade-adventure.

1. May take a while to get into without clues. 2. Frustrating to complete several tasks and then die through a small error.

A lovely game to look at, even if the Weeks are just about the most degenerate family in the entire computer game universe. Unfortunately, I found it desperately hard to play, mainly because your endurance runs out so quickly, but also because I couldn't figure out how to complete the tasks. But maybe I'm just a Wally. Like the 'song' says.

Tremendous graphics and animation and a puzzling task to really test the mind.