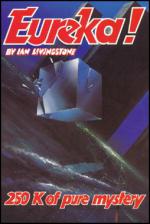 Eureka is a gigantic adventure game. It spans five eras from prehistoric times to modern. Each is a game in itself but they are also linked by a common theme.

The screen in the adventures is split into two. The upper part has some very good hi-resolution pictures on it, while the lower part contains a description of the current situation. The music introducing each game is very authentic for the period and the sound effects used during the game are also good.

I played part of the Roman Italy adventure though I didn't get very far. I came across Androcles and the lion and removed the thorn from the lion's paw. Whenever I came back to the lion he'd got another thorn in his paw; very strange.

I enjoyed Celtic Britain more. I fought a wolf bare-handed, and won. Eventually I got shot by a gun. The Celts were always an advanced race.

These adventures are good, but spoilt by the parsing which allows only a limited response to situations. The game comes with a book of associated riddles and clues and the first person to solve Eureka before 31st December 1985 wins £25,000.

These adventures are good, but spoilt by the parsing which allows only a limited response to situations.