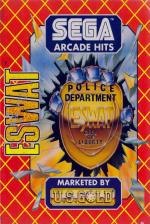 Cyber City is in the grip of a terrorist reign of terror! Criminals and convicts alike infest the city, looting, pillaging and generally causing a lot of destruction and mayhem. Of course, at times like this you'd expect the police to be doing something about this unholy reign of terror, but the immense nature of the crime wave has caught the Old Bill off guard. So, it's a good thing that the Eswat team of Cyber Police experts are at hand to clear up the mess with their robotic armour suits and mega-death machine guns.

Enter the player, tired of life as a hard-bitten Swat cop on the streets and who desperately wants to kick some criminal butt with the ESWAT (Enhanced Special Weapons And Tactics) arsenal. In order to join the elite team, the player must first bust three crime bosses before joining up with Eswat and then really getting to work.

The gameplay is spread across fifteen eight-way scrolling levels and the objective is remarkably simple. Our cop hero must blaze his way through the streets blasting anyone who gets in his way, collecting extra ammo along the way. If he runs out of bullets, our heroic law guardian relies on his karate skills and order to dispose of the felons. During his travels through the streets it's more than likely that our hero is likely to meet up with some more crime bosses. These cunning cons require a lot more than a couple of bullets to destroy and round after round must be pounded into them before they shuffle off their mortal coil.

But beware - most of these guys have a special trick in store for our hero. Some bosses have taken hostages that must not be harmed, and others have armed themselves up with terrifying Eswat-style armour!

The idea of blowing criminals away with a variety of heavy duty weaponry is as old as the hills (if not older still), but US Gold's conversion of Eswat manages to reach the parts that others can't reach! Perhaps it's the addictive gameplay that makes it a winner - the different levels are varied enough to sustain interest and there's always a compulsion to see the next.

The graphics are fine. Some of the backdrops seem a bit ropey, but the sprites are large and extremely well-animated. The sound is fabulous. Creative Materials (the programmers) have managed to cram in some of the coin-op's speech as well as a multitude of great effects - "Let's party!" scream are heroes as he jumps into action.

Eswat is a great game that is very satisfying to play - make no delay, go for it!

One of the best conversions we've seen on the Amstrad, with all the playability of the other 8-bit versions. Well deserving of your hard-earned dough.

The graphics are slightly blocky, but all the levels and most importantly, all of the playability remain in this excellent conversion.

A great game that is very satisfying to play - make no delay, go for it!