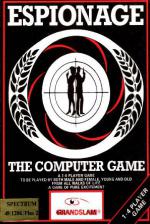 Do you want to enter the wild and mysterious world of spy and counterspy? How about dealing in strange markets like microfilm and illegal weaponry? Or maybe you'd just like to recreate your favourite scene from the latest Bond movie. Whatever the case, it it's excitement, thrills and spills you're after, you could do a lot better than Espionage.

Beating all their rivals by an incredibly small margin (£5), Grandslam managed to snap up the licence to this fairly unknown game at quite an extortionate cost (£5). The question is, is it worth half of my salary? No. Definitely not.

In workng man's (pleb) terms, Espionage is Chess without the complexities. You control 12 agents as they trek around the globe in search of four microfilms. Why they have to search is beyond me, as all four microfilms are grouped together in the centre of the board. The globe is represented by a grid of black, white and red squares. The black squares are no go areas for the spies, the white and red squares are where the player's home bases are.

Each of the four possible players (human or computer controlled) takes it in turn to move one of their spies. The 6 courier agents can only move diagonally across the board, but over as many squares as they like. The four secret agents can move in any direction they so please. The 2 surveillance agents can only move up, down, left and right (not diagonally).

Players take opposing pieces as in draughts; they jump them. Obviously, once all your opponent's pieces are removed from the board, the game gets a lot easier.

The screen is laid out in two windows. On the left is the main window. It's this one that takes up most of the screen and shows a segment of the board, which can be scrolled to show any part of the game. On the right is a status/score window that shows all the players' scores and films collected (if any.) At the bottom of this window is a box labelled 'Options', click the pointer on this, and a whole bunch of options comes up. Basic things like pause game and quit as well as pretty handy computer hint facility, with which the computer thinks long and hard and comes up with the best possible move you could do in your current situation.

Graphics aren't anything special. Just a coloured grip and some fairly basic icon graphics. One thing I do like is the pictures of the characters at the side of the screen. Whichever of the four players is currently active holds a newspaper in front of his face.

Control is fairly simple. A pointer moves around on screen under your control, and moving the pieces is simply a case of clicking on the piece concerned and then clicking on the square you want it to jump to. The pointer is a little slow.

So there you have it. A basically run-of-the-mill boardgame conversion that doesn't come anywhere near the fun generated by playing the real thing and it costs a few quid more. That's what I call VFM.