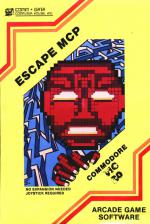 For some reason, only one of the four copies of this game would load; unusual in a Rabbit program.

This is a maze game. Stop groaning, it's a good maze game, and original at that.

There is little doubt that the MCP referred to in the title is not Male Chauvinist Pig but Master Computer Program as in Tron.

The point of the game is to rush along a convoluted corridor pursued by a leggy M-shaped object (which cares little for walls).

It is difficult to keep out of the way of the opposition, but possible with skill and dexterity. Control is from joystick or keyboard, the latter proving more precise.

Different levels are achieved, with increasing difficulty, as walls are in part invisible in the higher levels.

This is a good game, with only a little music. I recommend it!

This is a good game, with only a little music.
Logout