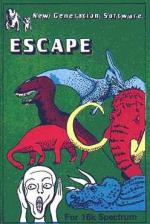 At the time when the software market for the ZX81 was really beginning to take off, one of the tapes which gained the most critical acclaim (and is still a bestseller) was the 3D Monster Maze from J. K. Greye software. It may be a different company this year but the author is the same. Escape, from New Generation Software, is based on the aforementioned Monster Maze, but this time the required hardware is a ZX Spectrum 16K.

When the tape has loaded, the instructions appear on the screen along with a preliminary warning about the dangers which the player is about to face. The computer then asks you to select a level of difficulty from the scale one to five. Upon pressing a number, the game starts.

You're right - it isn't that simple. To get out of the exit you need the axe which is hidden somewhere within the maze. And then, of course, there is the added danger of the tyrannosaurus rex who can be aided, according to whether or not you attempt difficulty levels two to five, by either one, two, three or four of his beastly companions who include a flying pterodactyl in their ugly band.

This is not, as it may sound, a jump on the 'Pacman' bandwagon but rather an original and absorbing game which can become extremely difficult and frustrating.

An original and absorbing game which can become extremely difficult and frustrating.