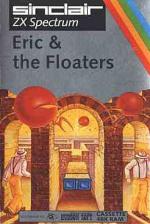 This game from Hudson Soft is marketed under the official Sinclair label.

Unfortunately, this game doesn't reach the high standards set by most of Sinclair's games in the past. In fact, it's another maze game.

Like many other games before, you're lost in the ruins of human civilisation as we knew it. The inhabitants of the remains are called Floaters.

Where they acquired this name I don't know. Maybe this tells us something about life in those times.

In reality, the Floaters are small blobs of colour on the screen and they are deadly to our hero. His defence comes in the form of bombs. These can be primed at the press of a button (the space key, actually) and Eric than has about three seconds to get clear.

If all is well, the Floater will wander helplessly into the path of the bomb and you'll be on screen two. If not, well there's plenty more bombs where that one came from.

There are 20 screens to the game and the number of Floaters increases on each screen.

If you are lucky then your bomb will dislodge some of the maze and you'll find something to your advantage underneath. This will be either a treasure chest or an exit.

The treasure chest is worth extra points. Finding the exit, though, means that you can collect all the bonus points for the current screen but not progress on to the next screen. So you can pick up twice your points ration.

The points system is calculated at random. It says so in the inlay card. A treasure chest is worth between 160 and 1260 points while bursting a Floater with your bomb will net you anything from ten to 200.

Movement in this game isn't ideal. Characters move only by a whole square at a time. The choice of keys for the keyboard option is badly thought out, although you can use a joystick if you wish (and if you have one).

The Floaters don't normally have any intelligence. They will wander round the screen with no idea of where they're going. But occasionally they turn from purple to red, which means that they know where they're going. You can put this period to good use, as planting a bomb behind you will usually force an unsuspecting Floater into its path.

A fairly average game, and maybe good for a few plays on a rainy day.

A fairly average game... Maybe good for a few plays on a rainy day.