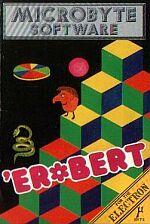 No prizes for guessing what type of a game this is. You jump around the pyramid with gay abandon in this.

Copying an old arcade game at this time is rather risky unless you include extra features that really pep it up. This version does have a number of interesting and new features but they don't quite make it. Chasing you on the maze there is a gorilla which looks excellent graphically but moves rather too fast for me. This is a problem with a number of the other characters too; the ball looks transparent, it moves so fast down the grid.

You can collect heli-hats and bananas in this pyramid. The hats act as transporters around the grid and the bananas your points. The usual balls and spinning discs are there, along with a black hole that sucks you right off the board if you touch it.

As I said, the extra features are there and the graphic shapes are good but the movement routines are strange and made me blink a great deal.

The extra features are there and the graphic shapes are good but the movement routines are strange and made me blink a great deal.