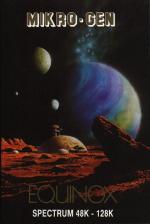 Knox knox. Who's there? Wally. Wally who? Wall 'e can get out of ere because these are strictly Equi knocks.

A timely break from the Week-ly mode by Mikro-Gen with a plot that combines Richard Branson-style litter collection with Kiev-style radioactive waste. It's the interminable depths of space again - ever feel you you've been there interminably? - the asteroid Sury-Ani 7 to be exact. It's here that the cannisters that'll crack your Geiger counter lurk, deep in the mines (... but you're welcome to them).

Luckily you have a disposal droid to do the dirty work, a cute little spinning thing that looks rather like an overweight Frisbee or even a fifties flying saucer (which, in reality, probably was an overweight Frisbee). You've got a vertical thrust control, left and right, pick up or use and fire.

Your mission is to locate the litter, dispose of it and then find a pass to take you onto the next level. But it's all a race against time before you exhaust your lasers, run out of fuel or the isotopes reach critical mass. And, of course, space wouldn't be space unless it was full of aliens getting in the way, would it?

Equinox comes to the Spectrum from the Amstrad and at first I'll admit disappointment that the graphics though still imaginatively drawn with some big chunky mining machines and the odd animal blinking away, lack the glowing colour that Alan S's other machine can generate. The opening music, even though it simulates two channels, also sounds quavery on the Speccy.

So are there rewards to compensate? At first I wasn't sure. This looked and played like a sub-Sorcery game. But then I began to do things and stopped floating around, just blasting at the blasted aliens. Lying all over the asteroid are useful articles that enable you to obtain tools, open doors, use teleports. Where you thought you had only nine chambers you realise there are sixteen! Suddenly it's much more fun.

Unluckily it isn't obvious at first just what object is needed where. Now I know you'd never want it obvious... but I've included a few clues all the same. They should get you started but after that you're on your own with only the lessons from level one to help.

Not a bad little game after all, allowing for the Spectrum's limitations. But I can't help feeling a slight twinge of envy for Amstrad owners - even if they do have to call their machines Arnold!

Not a bad little game, allowing for the Spectrum's limitations, but I can't help feeling a slight twinge of envy for Amstrad owners.