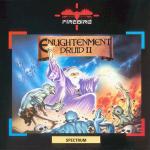 I'm not even going to attempt to explain the storyline behind Firebird's Druid sequel, Enlightenment, because it's so hopeless. Lots of the: "he uttered two words of mystical Druid chant" type of tosh, in fact.

All you really need to know is that you are up against your old mate Acamantor who's back in town after a hundred-year sulk from the last time you kicked him out. You've got to find the entrance to his dungeon, and get down there through all the bad guys.

I suppose I'd better explain what the Druid games are like. Superficially, they're a bit Gauntlet (Oh noooooo! - a nation protests) but the graphics are better defined and the gameplay is quite different.

Moving around is dead simple (in theory) - left, right and up and down. Like Druid, the Enlightenment screen is drawn in that rather irritating style of semi-plan view. Instead of being shown merely the top of the objects in the maze, you get to see the top and some of the side nearest to the bottom of the screen, if you know what I mean. This means that while it looks more appealing, it can be a right chore walking around, trying to work out whether you can squeeze between the fence and the tree.

The little devils in question come in a number of shapes and sizes. Acamantor seems to be able to control just about anything in the land of Belorn and use it for his evil purposes.

Even innocent looking shrubs and trees will spring to life as you walk past and scuttle after you, waving their branches in a menacing manner. If you come into close proximity of any of the nasties, your energy will be drained. When it reaches zero - you're kaput.

You can defend yourself in two ways.

You can shoot a fairly weedy looking lightning bolt which will knock off the bad guys after a number of strikes which vary from one to about seven. Your electrical energy is obviously limited, so it's no use shooting off bolts all over the place and leaving yourself so weak that you can't defend yourself.

And, being a Druid, you can cast a number of spells once you've 'learned' them. There are about thirty spells, and while you can only remember eight at a time, if you select a sensible mixture of offensive, obstructive and medicinal magics, you can become quite a force to be reckoned with.

As well as the run-of-the-mill Death Touch and Invisibility spells, you can conjure up an elemental of varying specifications to guard you or run errands. Depending on what environmental conditions you find yourself facing, you'll have to choose an appropriate Elemental. There's no point bringing up a watery Elemental if it's boiling hot, as it'll just frazzle away.

The graphics of the first level are actually very disappointing. The colours used are really quite bad - yellow and blue, and the whole affair looks quite low-rent. Later levels, however (there are ten above-ground and five dungeon levels) look great, and the style of graphics changes quite dramatically to give the impression of different landscapes. There are icy wastes, strange woodlands, deserts and the village of Ishmar, where you begin the game.

Gameplay-wise, Enlightenment is great. You move quickly and easily (with the exception of the tree problems mentioned earlier) and you have just enough time to juggle your spells and choose which to employ before the enemy catches up with you. It's possible to wander around for some time getting a feel of the game without actually having to solve many problems.

So what do we have then? Another Gauntlet? No, Druid was only really similar in theme. Enligtenment is a rather classy sequel to a fairly innovative game. A corker.