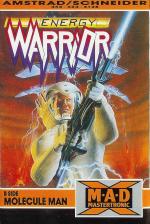 As a result of the star Cygnis Alpha going supernova, the inhabitants have left to find a new home. The new home they've chosen is Earth and you've been given the task of removing the aliens.

The screen shows a horizontally scrolling landscape and below that is a panel that shows the region, status, name of area and its aura. There are three regions: forest, islands and desert. Each region is divided into ten areas. Every area has an aura that is gradually drained by the aliens. If the aura of an area is reduced to zero then it dies. If three areas lose their aura then you die.

There are a mixed assortment of aliens to blast away at which fly in a variety of formations. Some fly individually, some in rigid formation and some in follow-the-leader patterns. There are also dragons that have to be shot in the head several times. When a dragon dies, it leaves an icon behind that you can collect to give you: more energy, aura repair, bombs, a mystery bonus and a key to exit the level. You'll also come across motherships which take 10 to 15 shots to destroy.

Sound is limited to simple blasting and exploding effects and there aren't any tunes. The horizontally scrolling landscape is fast, but only a small chunk scrolls to give the speed. The sprites are bright and colourful.

There's nothing exceptional about this game and it does get repetitive and tedious. The only thing that really makes this stand out is the fact that Molecule Man is on the B side of the tape. It's an old game re-released, but at least it means you get two games for £3. In fact Molecule Man is the better game - isometric 3D, maze designer and tough task.

Energy Warrior is a poor effort - instantaneously boring. The gameplay is dreadfully repetitive and requires no skill whatsoever. Molecule Man is much better but most fans of budget software will probably have got it already. We actually gave it a Rave way back in issue 11 and it still isn't bad today.

Just as easy to see everything in green.

Grab Factor 35%
P. Sure is easy to start zapping away.
N. Virtually no skill required.

Staying Power 27%
N. Mindless blasting of the worst variety.
N. Not enough variation in the waves.

Overall 45%
P. Two games for the price of one budget title.

Energy Warrior is a poor effort - instantaneously boring. Molecule Man we actually gave a Rave to... and it still isn't bad today. 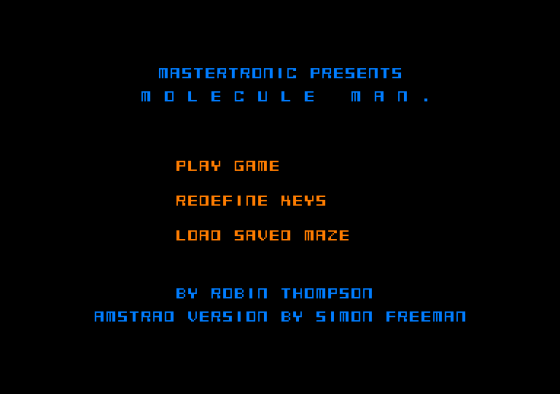 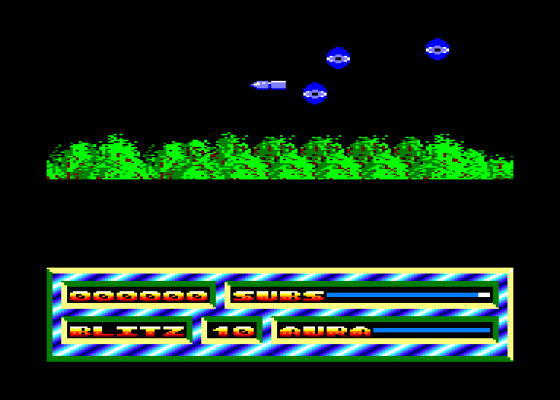