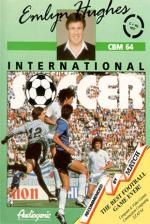 "Y'know Saint, we seem ter be makin' more an' more appearances in computer magazines these days."

"Ha ha... Aye, ye're right there Greavsie - there seems to be a new computer football game on the market every week! Whose name's on this one, then?"

Audiogenic's game of football, Crazy Horse style, begins on an opening screen containing four pull-down menus. From these you can do the usual football game feats such as choosing one of ten skill levels as well as strip and pitch colours, but you can also select and edit teams and individual player skills (such as speed). Satisfactory squads can be saved to tape or disk for future use.

The menus also bestow certain abilities on the players, such as back-heels and five direction kicking, all of which are accessed from the joystick during a game. A practice option lets you familiarise yourself with joystick skills by pitting you against a team whose members freeze whenever they get the ball.

As well as these facilities, you can play cup, league, championship, season or friendly matches, and show or even print out fixture and results lists. Up to four players can play in competitions, two playing together as a team against a computer squad.

Once you've configured the game to play the match of your dreams, it's time to kick off. During play, the standard scrolling grandstand view of the action is shown with a display above the pitch to indicate the name of the team member under each player's control. The computer puts the player nearest the ball under joystick control, but an option exists to allow you to select the controlled player from the joystick.

As you might expect, the game's authenticity extends to the objective being to score more goals that the opposition before the final whistle blows.

When you first see someone playing this, you'd be forgiven for thinking it was Commodore's age-old International Soccer, but EHIS' graphical crudeness belies its sophisticated gameplay. An absolute wealth of options makes the game incredibly flexible and ensures that boredom won't set in for a long time.

Unlike certain other computer football sims, it isn't slowed down by its extra features and doesn't need tiny gauges to display kick strength, etc.

The joystick control is very easily mastered after a few practice games and you're soon dazzling the crowd with back-heels, sliding tackles and diving headers.

I'm really looking forward to Sensible Software's Micro Soccer, but it's going to have a hard time beating this!

The best thing about this game is that you can play it at almost any level. If you're not feeling particularly strategic, you can just hit practice option and go straight into a match.

On the other hand, if you're into really serious footy confrontations then you can spend ages selecting exactly the right options from one of the most comprehensive menu systems I've ever seen.

It's not just the presentation that's outstanding - the gameplay is incredibly easy to get into and has obviously been really carefully designed.

Even the sound, to which (to be kind) they haven't exactly devoted lashings of memory, contributes to the atmosphere. It's great to hear the crowd gasping when you almost get a goal!

With all the cheapo football simulations that have recently been flooding the market, it comes as a welcome change to discover a really professional game.

I used to think that International Soccer was the be-all and end-all of footy games, but EHIS wipes the floor both with it and Matchday II for sheer playability. Ignore the graphics - they're not brilliant, as you can see from the screenshots - and ignore the sparse sound effects which, even when they do appear, are fairly tuneless - the action is fantastic!

All kinds of moves are available to you, and when you hit the post or score a goal, you really feel the thrill of having done it! Had the graphics and sound been a bit more polished, I'd have been tempted to give this a Gold Medal, because it's easily the best soccer sim available on the C64.

The ball movement in particular is incredibly realistic: deflections from posts and opposing players, chips and headers are almost like watching the real thing! I've no hesitation in recommending it to any soccer fan, because it's nothing short of superb.

Presentation 98%
A vast array of options allow you to reconfigure the game to the nth degree.

Graphics 79%
Very fast and smooth, but all the graphics lack definition. The relatively high mark is due to this speed, coupled with the realistic ball movement.

Sound 28%
Good crowd cheers and air-horn noises but nothing more.

Hookability 88%
Some practice is required to master ballplay, but the difficulty selections make it easy to acquire the necessary skills.

Lastability 96%
The game's enormous flexibility will hold your interest for ages.

Overall 90%
Quite simply, the best football simulation available for the C64!

Quite simply, the best football simulation available for the C64!