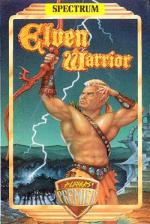 Fancy playing a part in a strange story of elves, witches and magic cauldrons? Well, Elven Warrior is the one for you. Elf has learnt how to perform magic after discovering an immortal manuscript full of spells. You have to help him out by exploring the kingdom and collecting four potions to fill the magic cauldron.

Playing the game is very simple, with you not being able to jump diagonally, only up, which is extremely annoying when you need to cross a gap - it's just impossible. Catering for all tastes there's the option of having the game in either green monochrome (yeuchh!) or full colour: you do get a little clash but nothing too drastic.

Collecting potions and filling cauldrons seems the most boring concept in the world for a game, but Elven Warrior is surprisingly addictive. Each time you fill a cauldron and go exploring again, you find that lifts have appeared, new scenery has been created and the game is getting bigger and bigger.

The sprites are small but detailed, and the animation is very smooth. You could say it's a glorified platforms and ladders variant, and why not? Everybody loves a nice little game to get stuck into. Elven Warrior will keep you occupied for ages, working out where all the potions are and starting again because you jumped on the wrong cliff and into a fire! Great fun.

Elven Warrior will keep you occupied for ages, working out where all the potions are and starting again because you jumped on the wrong cliff and into a fire! Great fun.