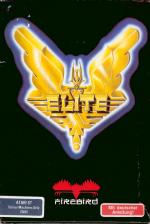 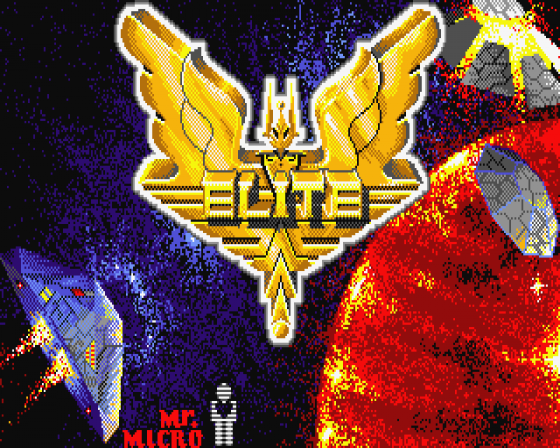 Elite, the game that became an overnight sensation when it was released on the BBC back in 1984, and is now widely regarded as one of the all-time classic computer games, has finally made it to the 16-bit machines.

It's a space trading game, if you don't know, and casts the player as a pilot of the future, who travels the universe in search of fame and fortune. The game is presented in filled-3D, rather than the vector graphics of earlier versions, and incorporates several new features and extra missions.

The player starts a game with 100 credits and a Cobra Mk III trading and combat craft, complete with single forward-firing laser, three bombing missiles and seven light years of fuel. Rated "harmless", the objective is to increase your status - by fair means or foul - and become "elite". There are two basic ways of doing this: honest trading, or by becoming a mercenary and running contraband goods and attacking innocent craft. Although the latter tactic guarantees faster progression, it also runs the risk of attracting police attention and possible intervention. And in this particular far-flung future, the results of that can be fatal... 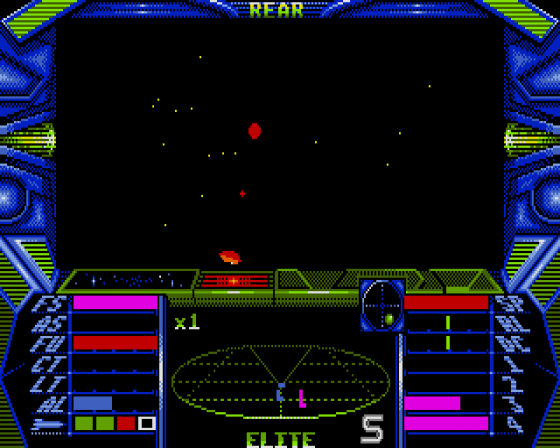 The mission begins with the Cobra at Lave Authorities space station, and from here any of 2,000 planets may be visited. But first it's a wise idea to stock up with goods. There's a wide variety to choose from, but due to restricted credits and cargo hold, what you'd like to carry, and what you can actually carry may be two different things entirely. Possible cargoes include would be best to sell his goods. Careful planning is required here - there's no point trying to trade foods in a rich agricultural system - that would be like selling sand in the Sahara! Try machinery instead.

When the destination has been chosen, the Cobra is launched into space, and you're on your own. On-screen information during space flight includes the Cobra's shield level (depleted through repeated hits), speed, fuel level, cabin and laser temperature, altitude, missiles remaining, compass and radar, which shows everything in the immediate vicinity.

Pressing the H key initialises the hyperdrive, and the Cobra is transported to the destination planet. The ship actually emerges from hyperspace some distance from the planet, and the jump drive can be activated to send the Cobra zooming towards its destination at high speed. The drive automatically disengages when it's near to the planet, or if there's a ship nearby. When the Cobra flies within range of a space station, an S is displayed on the radar screen and the compass can be used to direct the ship straight towards it. 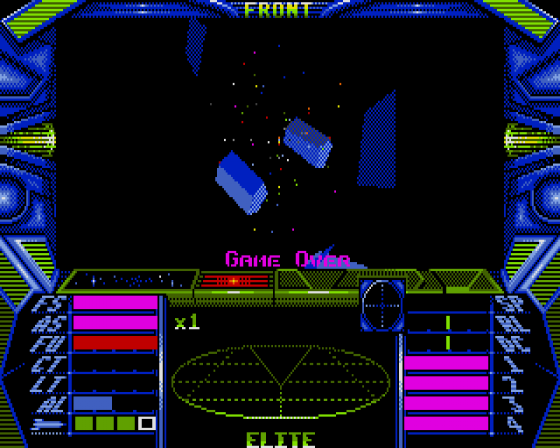 Docking with a space station involves lining the Cobra up with the entry port, so that it can be flown in without scraping the sides. Since the space station rotates, this is far from easy and my first few attempts ended in me going for an impromptu and fatal space walk through the wreckage of my own craft! However, practice makes perfect - and since this is such an integral part of the game, you really do have to practise!!

If you manage to dock successfully, you can trade your goods, buy some more or equip your ship. Extra equipment is varied and pricey, but one of the most important items is an automatic docking computer, which eliminates the risk of crashing into a space station - it does the job automatically. An escape capsule is similarly useful, as it allows you to eject the Cobra is about to be destroyed. Although your cargo is lost, you'll be tracked down and brought into the nearest space station with your bank balance intact.

An ECM is useful against enemy missiles, and a larger cargo hold, more powerful armament, fuel scoops (which let you grab extra fuel by flying close to a sun) and energy bombs may also be purchased. 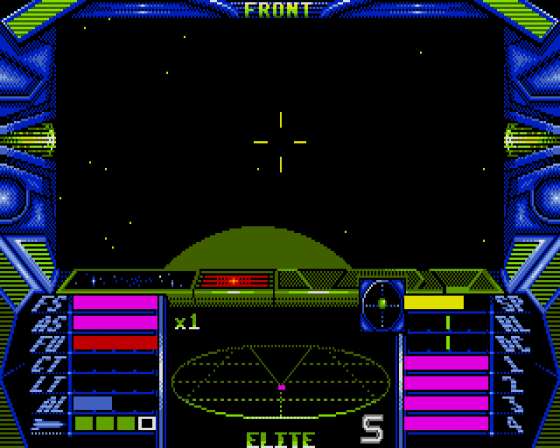 When the ship is docked, the current position can be saved, or an old position loaded - saving at regular intervals is a very good habit to get into.

Once you've finished, it's time to search for another potentially lucrative trading area, and blast off into space once again.

During your travels it's inevitable that you'll encounter other traders and ships. Some are passive, and others aggressive - if a ship is the latter, "red alert" appears on-screen, and a klaxon sounds to warn of an impending dogfight. Here the choice is simple: attempt to run, or stay and fight. If you're a beginner with standard armoury, it might be wiser to show a yellow streak and beat a hasty retreat. If you're of tougher mettle and want to fight, prepare to battle for your life!

As your status increases, so does the frequency of attackers, and if your exploits tend towards the criminal, the intergalactic police may also attack on sight.

Later in the game, you're asked to complete specific missions for a large reward. There are five of these, ranging from a seek-and-destroy sorte to tracking down a specific alien item.

The ST version of Elite is excellent, and boasts superb presentation, fast and smooth gameplay, great graphics and five new missions. Purists will be pleased to know that none of the basic 8-bit gameplay has been changed, and the action is even more enthralling than the original versions.

Trading and fighting is a highly enjoyable experience, although the going does get occasionally tedious when you can't use the jump drive due to the presence of other craft. This results in the player having to locate the space station manually, which can take over a quarter of an hour! Another gripe is that the sound is rather feeble - I'm sure the effects could have been a little more meaty.

That aside, Elite has enough depth to keep budding space traders engrossed for many months. 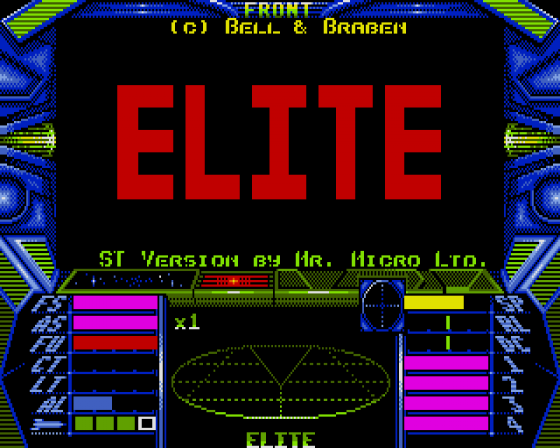 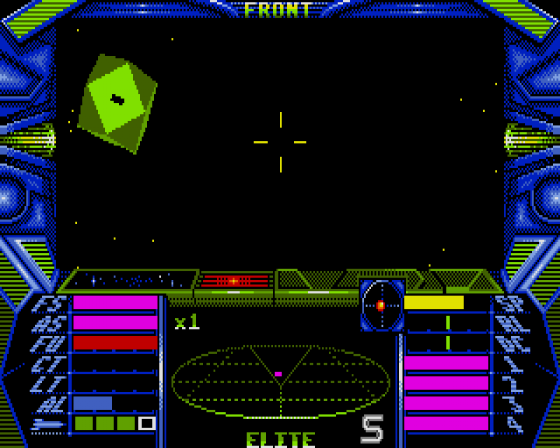 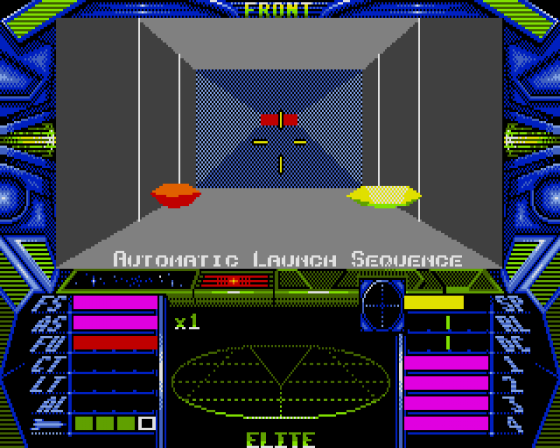 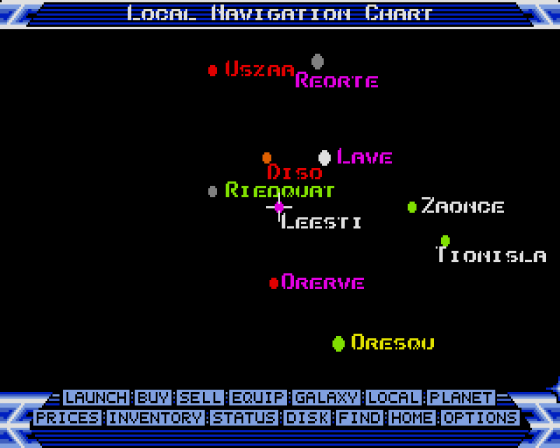 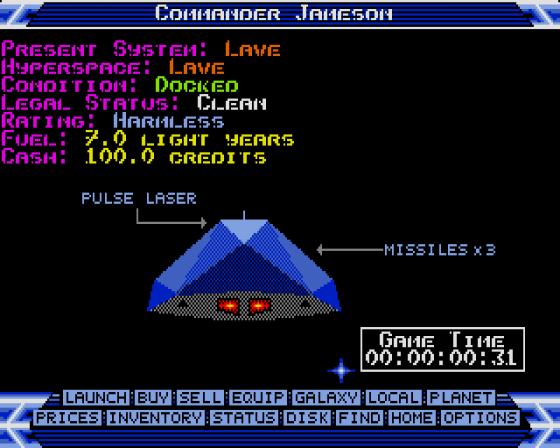 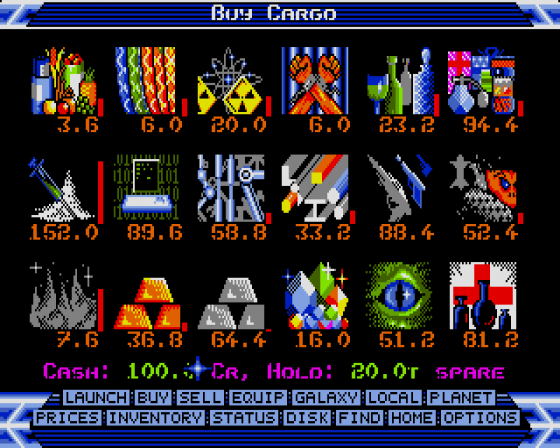