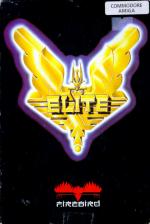 You reported to the launch station on the planet Lave early this morning, ready to catch the first shuttle up to the Coriolis station to collect your papers and ship. A quick signature and you're issued with your trade permit, flight pass and 100cr in-service pay. Trading is your main objective - but will you trade legally or illegally? For the latter the risks are high but the rewards great - and big rewards mean better weapons and a bigger ship...

You slide into the pilot's chair and hit the Power Up key. The cockpit lights up in shades of green and blue and the monitor flicks up a status screen. You key into the market system and load up with textiles - a commodity which will hopefully not attract too much attention from the pirates. After keying in a course and launching from the station you go for it. You kick in the Hyperdrive...

Your choice of system for a first flight wasn't exactly first class, however - you appear to have dropped into the middle of a dogfight. A lone Cobra Mk I is struggling to escape from a rather nasty Mamba class fighter.

"Obviously a pirate," you think to yourself as you line up your crosshairs on his back. Just as you loose off a few streams of laser fire, the pirate notices you and loops back to face you. Quickly jamming a few buttons releases a missile towards the Mamba and he soon erupts in a flash of wreckage and flame.

But the Mamba wasn't alone - the rest of his squad are bearing in on you, hammering shots into your hull. The Cobra has gone, leaving you to it.

This has all the addictive qualities and all the depth that you could ever want from a game. When you first pick it up and begin to play, the complexity and range of control options are overwhelming - and it may put a few people off (those of you who haven't played the 8-bit versions). However, once you're accustomed yourself to the controls, cruised around a couple of planets, got involved in some dogfights and bought your first extra weapon - well, there's just no going back!

Visually, it's dead good: little graphical touches such as the extra ships you find already docked in the space station all add to the atmosphere... The sound effects are similarly ace, if a bit sparse, but that's in no way a criticism: even the silence adds to a sense of loneliness in travelling the vastness of space. I don't think we could have asked more of this classic conversion: it's simply superb.

Oh, playing this takes me back, I can tell you! I remember the days of 15-hour playing sessions in front of my BBC Micro, pondering over the trading complexities of an anarchy system whilst dodging unscrupulous pirate ships. Yes, folks! Elite is here! The game is so complex it seems that you have entered a completely different system.

Everything is so detailed: planets buy different things for different reasons, pirates carry the cargo that they would have bought in the nearest station and every piece of equipment has a make and trade history.

Once you start getting into the game you find yourself learning all the makes! All the refinements that have been made since the 8-bit versions mean that the original trade and combat game has lost none of its appeal. It's even better than Starglider 2 - and coming from me, that's saying something! Buy it as soon as you see it.

Presentation 99%
Virtually faultless with choice of controls, detail packed manual, single load... There must be something wrong somewhere, but we can't find it!

Graphics 92%
Superfast and smooth 3D, but the colours could be slightly less garish.

Sound 90%
Peaceful rendition of The Blue Danube - remember that from 2001? - set against powerful and atmospheric sound effects.

Hookability 89%
The complexity of the game draws you in, but it also gives you a lot to learn.

Lastability 96%
With this kind of depth, it's immensely playable for a very long time.

Overall 98%
With products like this, Rainbird are rapidly becoming the best 16-bit software house around. Even at £24.95, don't hesitate to buy Elite!

Don't hesitate to buy it...! The complexity of the game draws you in, but it also gives you a lot to learn.