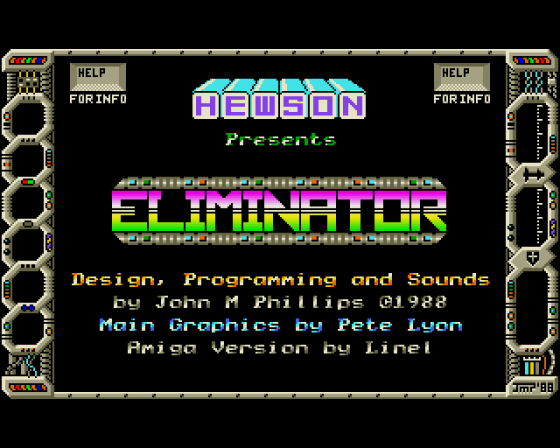 Mayhem! Murder! Massacre! Aaaargh! Right, now that I've got that out of my system I'll carry on... Eliminator is a game based on high speed destruction (hence the outburst at the beginning of the review), taking place in a strange (wooeeeooo an' all that) dimension.

You are the Eliminator - "a machine encircled by death, that kills but cannot be killed". Well, strictly speaking, that isn't quite true. There are things that can kill you. You must race your strange craft along a series of 3D raceways. Strewn along the track are various obstacles, each of which require a different tactic to overcome...

Aliens: Move in formations on the raceway, and can be killed using your weapons.
Walls: Block sections of the raceway and must be dodged.
Flames: Span the width of the track and must be jumped via...
Ramps: Can send you over flames or onto the roof (if there is one).
Targets: Must be shot to pass them. 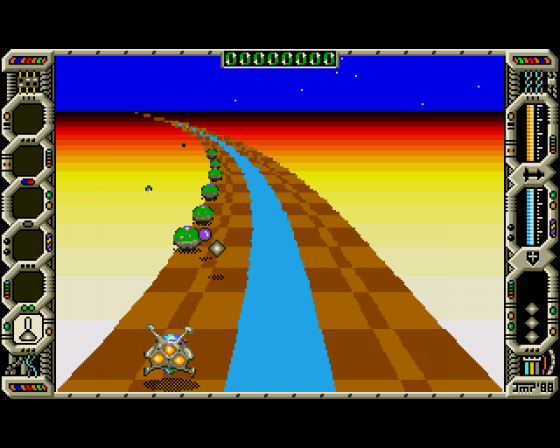 Also along the tracks are hovering shapes: either a blue pyramid or an orange block. The blue blocks furnish you with an extra weapon (see Weapons box, below) and the orange blocks top up your diminishing ammo supply.

Collision with enemy fire decreases your shield and a collision with an enemy or piece of landscape causes instant death. 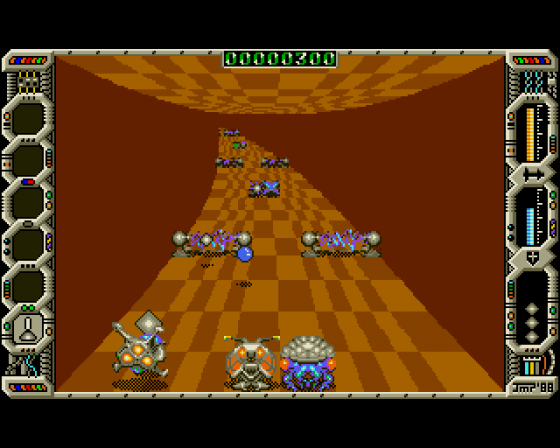 It would be a hard decision - choosing between Eliminator and a hundred-weight of doughnuts, I mean - but in the end Eliminator would probably win.

If you've been waiting around for a really outstanding race 'n blast game with excellent 3D graphics and brilliant fast action gameplay, look no further, because this is it.

If you liked Trailblazer and Cosmic Causeway on the C64, you'll love this 'cos it manage to mould the best elements of both of them into something even better. The sound may not be up to all that much but the password system and all that zooming around like a penguin with his pants on fire (eh?) definitely makes up for it. 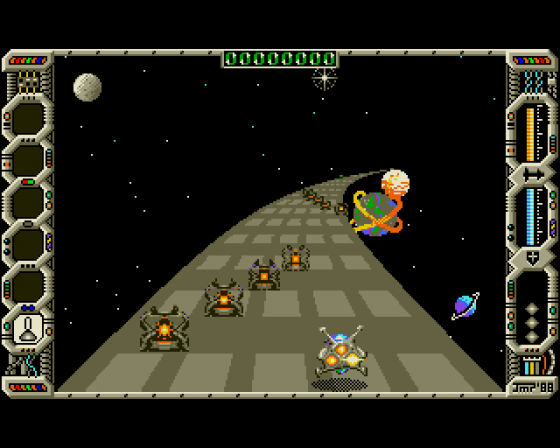 If you fancy adding a neat little 3D shoot-'em-up to your software collection, rush out and get this now.

This game reminds me of Trailblazer. Not that this is a bad thing, as I thought that Trailblazer was brilliant. Eliminator has a few extras though, and they change the gameplay quite drastically.

Instead of just steering and leaping, there's a whole lot of frenetic blasting to contend with as well. The 3D is very effective, zooming convincingly out of the distance, and the sprites are nicely coloured and detailed. In fact, the whole thing looks extremely polished. 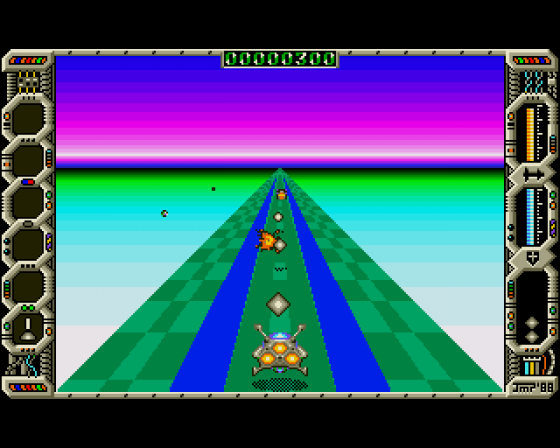 The gameplay is every bit as fast as the graphics, which means that you'll require very quick reactions to get through the levels. The only thing I'm disappointed with is the sound, which is rather weak.

Yeeha! Zip up your flying jacket, leap into your streamlined Eliminator and get ready to rip up the road. The 3D is much more realistic, fast-moving and exciting than something like Fire And Forget (snigger, snigger) - OK, so the aim of the game isn't quite the same; but boy, do those graphics shift. 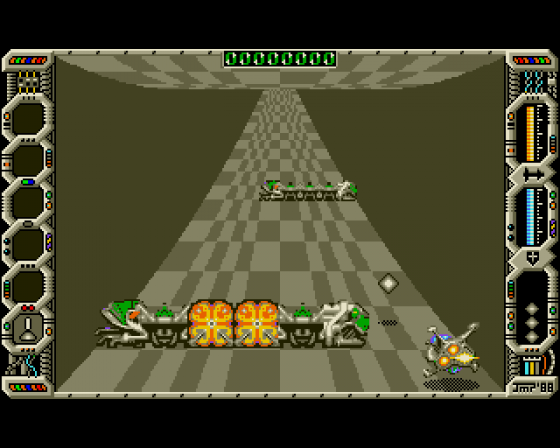 Talk about exhilarating! OK: it's really, really exhilarating. Even better than that (Is this possible?), the tracks are brilliantly put together; there's so much to think about at any one time, that when you do head splat into the nearest wall, you just can't wait to try the course again.

If you haven't already rushed out to get your copy, grab your coat, sprint down to your nearest friendly software dealer and get hold of one. This is one race-cum-shoot-'em-up you can't afford to miss!

Sound 58%
The average effects and somewhat annoying tunes seem very out of place.

Hookability 92%
The speed and excitement make it a joy to play from the first game.

Lastability 88%
The levels are rather similar but it's still very playable.

Overall 89%
A thoroughly good speedy blast. If only the sound was better...! 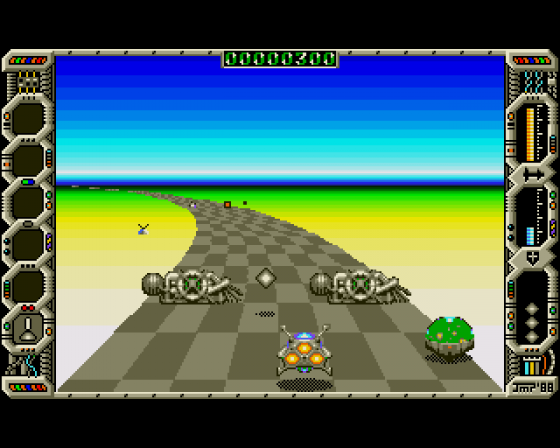