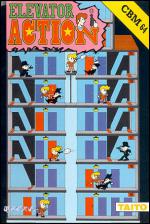 Otto is really hard. He's a tough secret agent who has just been given a mission: to enter a thirty-storey skyscraper and recover a batch of stolen secret documents. Taking the role of this super-spy, the player begins the mission having just landed on the roof of the building in question.

The objective is to search the floors from top to bottom, using the lifts and escalators which connect them. Moving the joystick when Otto is standing in a lift or next to an escalator takes him up or down, with the screen scrolling to bring a fresh level into view.

On every floor, there is a row of locked doors. Most are irrelevant, but occasionally one flashes to signify that there's a stolen document concealed behind it. By standing Otto in front of the door and pushing upwards he disappears behind it, emerging a few seconds later with the stolen paper in his hands.

Otto is repeatedly attacked by the building's armed guards, appearing from behind locked doors and shooting on sight. A direct hit costs Otto one of his three lives, and causes him to restart his quest from the top of the building. Our hero can fight back however - armed with a pistol, he eliminates the guards to defend himself.

When all the documents have been collected, Otto catches a lift to the ground floor when a getaway car awaits. And all because the lady loves... Nah.

I'm really surprised by how poor Elevator Action is on the C64. The programmers have failed miserably in every way; the graphics, sound and presentation (and to some extent the gameplay) have been lost during the translation. It didn't hold my attention for very long, as none of the arcade game's original qualities are present in any shape or form.

Such a waste, especially when you consider how well Micropool improved upon the basic theme.

I'm pretty disappointed, especially as I've been looking forward to this for some time. Why? Because this conversion completely fails to capture the spirit of the arcade original.

My major moan is that the playing area and the characters are miniscule - why couldn't they have all been larger? The screen glitches horribly as it scrolls, and the sprites often float around on their own. Bullets often stop in mid-air (!), and sometimes it's possible to walk right through them!

Another detraction is the awkward control method - it's virtually impossible to get the character to do what you want him to. Personally I'd go for Micropool's Mission Elevator - it's miles better.

Presentation 46%
Average title screen, no options, and very poor use of joystick.

Sound 71%
A repetitive, but atmospheric Dave Whittaker tune plays throughout.

Hookability 48%
The simplistic arcade action is easy enough to get to grips with.

Lastability 23%
All the levels are exactly the same and the action soon becomes boring and predictable.

Value For Money 19%
Vastly overpriced - you'd be wiser to invest in something more professional and playable.

Overall 29%
A disappointing conversion of an ageing, but still playable arcade game.

A very disappointing conversion... It completely fails to capture the spirit of the arcade original.