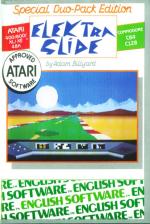 Elektra Glide is the best road racing game that I have ever seen. This game is truly brilliant. A term I don't often use with games, but this game is really exceptional.

After waiting an incredibly long time for the game to load, you are greeted with the title screen which comprises a waving union jack and the Electra Glide logo - which is vector-drawn and 'flows' between the words Electra and Glide. After this is the options screen which gives you a choice between three different steering envelopes. These envelopes change the weight and feel of the steering. You also have the option of in which country the game should take place. The choices are America, Australia and the British mainland.

Depending on the choice you get a slightly different track, with a different colour scheme - for me, Australia seems to be easier, but the instructions only say that they are different. Not that there is any dificulty change between countries.

Changing between countries causes a map, displayed on the left of the screen, to flow from one to another. This is a most interesting effect, and even when you know how it's done, it can be very impressive.

Press start and you're into the game. The screen is dominated by the view of the track in front of you, with a small control panel showing time left and speed along with some pseudo instruments that show flickering shapes, as far as I can see these are there for no real purpose though they do seem to change along with various happenings on the track - though this may only be an effect.

As mentioned earlier, the colour scheme is dependent on the country that you are running over, though the graphics don't change - i.e. you still get snow-capped mountains in Australia and Britain!

The object of the game is just to survive. The road twists and turns with trees on either side of the road (even in the desert!) but these are not the problem. What really messes you up are the rotating triangles that float over the road, and the zig-zagging bouncing balls that charge down the road in the same way as the mysterious sphere in 'The Prisoner' - all very eerie.

Added to this is an alien space ship that flies overhead and drops great pillars in the road, very difficult to avoid unless you are at the right speed for your steering envelope. I prefer steering envelope three; this means that you can zip around the things at maximum speed.

Joystick controls are forward to accelerate, back to brake, and left or right steering. This may sound obvious, but the instructions don't tell you about it, and it took me a few plays before I worked out where the brake is - maybe I'm just getting old! You also have to keep the joystick pushed forwards all the time to keep the speed up. I don't like this as it reduces your steering control and gets very painful after a while if you are using the old-style Atari stick with the pointed corners - perhaps English Software don't use this type of stick? I wish I didn't.

At the start of the game, you are in a tunnel. The effect of this is stunning, and is even better at the end of evel one where you have to drive along a longer tunnel to the next level, the tunnel has corners in it and the 3D effect of the opening of the tunnel coming towards you and the exit looming up - being able to see the scenery of course - is incredible.

At the end of level two, you are greeted with a fork in the road, wonders will never cease, that's as far as we got - I hate to think what could happen in later levels.

There is no score as such, so your progress can only be measured in how long you lasted. You start off with eighty seconds on the clock, and get a further 60 seconds added on to your remaining time when you change to the next level.

The tactics needed to play the game mainly rely on a good memory, as at the speeds that the game goes at a map would be next to useless unless somebody was calling it out.

The objects on the track appear in a similar manner to those in Star Raider, a video disk game that had a limited success in the arcades. But, of course in Electra Glide, they all move. The most numerous obstacle is the triangular prism shape that sits in a fixed position at a fixed height over one of the lanes in the road; once their positions can be memorised it is an easy task to avoid them.

The next easiest are the pillars that the space ships drop; these will always appear in one of a number of possible positions (I think), and as mentioned earlier if you change speed to that which gives you maximum turning ability on your steering envelope then you will be all right, just remember where they are and zig-zag through them.

Each pillar stretches from about the same height as the prism shapes, but extends to the ground; they always sit in the middle of a lane - so just use the other.

The really awkward obstacles are the bouncing balls. These balls bounce up and down and will always bounce on the lane that you are on or, if you are in the middle of the track, they will bounce from side to side. There are two tactics for avoiding these, time it right and drive underneath them, or drive up to them on one side of the trak. Then, at the last moment possible with your steering control envelope, zip over to the other lane.

The big problem with all of these obstacles is that they occasionally appear on corners; this means that you either can't see them until you are too late or you can't tell which lane they are on - well, such is life! If you hit them you stop dead, and thus lose valuable time.

Another problem encountered is concerning, whenever you hit the side of the track you slow down, losing time again, so it is wise to learn the steering techniques as soon as possible. I found that steering with the corner until you see a tree coming towards you and then steering away from the corner, which will line you up with the straight properly, is the best technique. But, other people have different theories.

The music that accompanies the game is very good and fits the mood of the game perfectly, though after a time, it could get a bit on your nerves.

The one gripe I have about the game is that if you crash off the road and on a corner, you take a disproportionately long time to start up again, this being a product of the slow initial acceleration of the car and the speed reduction due to being off the road. It can be the case that one crash under these circumstances can lose you the game.

Despite this, I still think that the game is brilliant. There is little competition, there being no score, and there isn't even any other cars on the road. The whole pleasure of the game is just playing it.

At £8.95 for the tape, or £12.95 for the disk (Well worth it, Elektra Glide is a very, very, very long program!). It is good value for money, and one of the best Atari/Commodore games that I have seen for a long time - go out and buy it now!

One of the best Atari/Commodore games that I have seen for a long time - go out and buy it now!