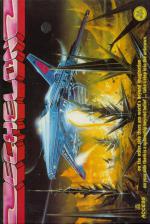 Oo ar jim me lad, the pirates are on the rampage in Echelon. But they aren't yo ho ho and a bottle of rum guys, or even software pirates, but space pirates of the future. ECHELON is an anti-piracy organisation and you're one of its top pilots.

To find the location of the pirate's base you must pilot your C-104 Tomahawk over 36 zones in search of 240 objects. Most of these contain clues, although some are booby-traps, and once teleported aboard can be analysed. Most of these clues are in code which you must decipher. To help you get started nine of the zones are already mapped and included in the packaging.

Naturally the pirates aren't too pleased by your investigation. You can fight their ships with a choice of three weapons. But if you find combat too tough, or boring, then you can alter the enemy's strength from numerous to zero. You still have to return to base for refuelling however.

The view from the cockpit is depicted by wire-frame graphics, which move at an incredibly slow rate - I'm sure I went to sleep, had a great dream about scoring the winning goal in an FA Cup Final and woke up again before the screen updated! Even turning the zone map off only marginally improves the speed. Sound is nonexistent, which is very confusing during combat, and adds to the tedium.

Perhaps the technical drawbacks would've been acceptable if the game was better and it certainly sounds ambitious, with ciphers and so on. But Mercenary it ain't, and the repetition of collecting objects soon induces sleep - if not a coma.

THE ESSENTIALS Joysticks: Sinclair Graphics: the jumbled lines that pass for wire-frame graphics move slower than the Art Department... Sound: ...but at least there's no Radio One, or noise of any kind Options: alter the strength of enemy ships

'The best thing about this game is undoubtedly the sound - complete silence. Everything else is awful. Combat is probably the worst due to the dead-sloth speed of screen update, sluggish control responses, slow firing weapons and jerky enemies. Finding objects is little easier though, and with 240 to collect this is a game to haunt your worst nightmares.'

A game to haunt your worst nightmares. Combat is probably the worst due to the dead-sloth speed of screen update, sluggish control responses, slow firing weapons and jerky enemies.