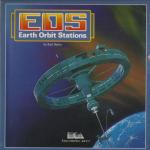 With the increasing realisation of the importance of space exploration as a commercially viable venture, Earth Orbit Stations (EOS) comes as a possible candidate as science fact rather than science fiction.

Set toward the end of the century, Earth Orbit Stations centres around the construction of modular space stations. Up to four players take the role of aspiring Space Directors and attempt to build and manage space stations, produce profitable products, conduct research and eventually aim to fulfill a mission goal. These missions are: Research, Dry Dock, Shuttle, Mars Rescue, Lunar Base, Space Colony and the final option, Search for Life.

'Research' is a simple project to help acclimatize the player(s) to the game and its operation. To complete this scenario, each Director builds a profitable space station and follows market trends (as outlined in the Earth Orbit Stations news section) to choose the most profitable activity.

Each space station is constructed from purpose built sections that fit together using special connectors. Starting with command, power life and logistics, further sections are added from a wide range of industrial modules.

Once a monetary base is developed, research is entered into. Instead of earning money, these modules collect technology points, and the director with the highest amount of points is deemed to have 'won' the Research mission.

A similar method of play is used in later projects, but definite modules are needed for their successful conclusion. In order to get these modules, the technology required for their construction must be researched. A manned lunar base, for instance, can only be set up once the technology to produce fabrications in space, and the necessary transportation has been researched and developed.

The four participants may be human or controlled by the computer, and the game in progress may be saved to disk at any time.

Earth Orbit Stations is an involved game from the start. Practice is definitely required before you can get around to playing a mission 'seriously', let alone completing one!

The vast array of modules for attachment provide plenty of scope for station construction, and with seven missions, the possibilities are endless!

The time taken to process each turn could have been speeded up, and possibly the instructions could have contained a couple more diagrams for the first-time player.

Having a keen interest in space technology, I hastily loaded the program. At first glance, Earth Orbit Stations appears terribly complex and rather impressive, but looks can be deceptive.

Once I had familiarised myself with the lengthy (and unnecessarily overcomplicated) instructions, it boils down to the simple task of repeatedly building space station after space station, making as much money as possible (a fairly straightforward task), completing research projects and selecting new modules as and when they appear on the menu.

Earth Orbit Stations is laborious, repetitive and more or less crippled by a frequent and pathetically slow disk accessing system. You might enjoy it, but I don't.

The concept of building space stations and going on five year missions to seek out life and strange new worlds is a great idea. However, the execution is very poor indeed.

The program constantly accesses the disk and loads the extra data at an toe-curlingly slow speed, forcing you to sit and stare at a blank screen for what seems like hours. The other annoying feature is that the game is also incredibly easy to crash!

All you have to do is insert the wrong disk at the wrong time and the machine completely locks up!

EOS has some nice ideas, but unfortunately the gameplay is too slow and unrewarding to be worth persevering with.

Hookability 25%
It takes quite a while to wade through the instructions and lengthy disk operations.

Lastability 32%
There are plenty of missions, but single player mode is fairly pointless, and the computer is a poor adversary.

Overall 40%
An admirable idea, but the design and implementation is far below expectations of the asking price.

An admirable idea, but the design and implementation is far below expectations of the asking price.